With swirling winds and relentless rain, Sunday’s weather might have been more appropriate for a biblical story than a soccer game. These conditions deterred many fans, putting the in-stadium attendance far below the announced number of 17,569. Still, those who braved the elements were rambunctious throughout the night, providing an energy that was felt on the field. 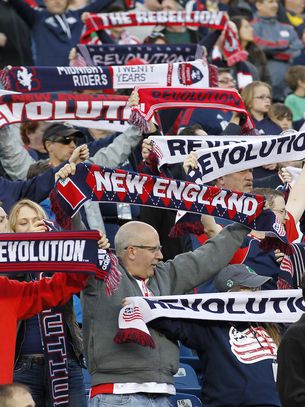 Take a look at the tifo everyone is talking about.

"We really appreciate the fans and the fan support," Kevin Alston praised. "They’re here every week cheering for us. We try to give back to the fans."

More than just their typical chants, supporters offered something special for this past weekend’s MLS Cup rematch as fans in the Fort raised an Avengers-inspired tifo before the match.

Designed by Ben Saufley, the display featured Bobby Shuttleworth as Captain America, Charlie Davies as Iron Man, Jose Goncalves as the Incredible Hulk and Jermaine Jones as Thor. It was also emblazoned with the word "REVENGERS," a reference to Dec. 7 when the LA Galaxy topped the New England Revolution to win the MLS Cup.

The tifo, a joint collaboration between the Midnight Riders and Rebellion, took weeks to design and put together. The final product was ready for its debut on Fox Sports 1’s national broadcast.

This tifo, and the ones that preceded it, embody the fervent fan base found in New England. Once a joke throughout the league, support for the Revs has grown in recent years. Last season, the Revolution's average attendance was 16,682, their best mark since 2008. The traveling support was just as good as over 1,000 fans traveled to Red Bull Arena for the first leg of the Eastern Conference Final. A similar number ventured cross-country for the MLS Cup Final.

Caldwell, a Homegrown talent who once watched Revolution games from the stands, has noticed the growth in support.

"I don’t know what they’re doing behind the scenes but it’s obviously great stuff," Caldwell said. "They’re really putting in a lot of time and they’re traveling a lot. It’s really impressive. We’re very happy with it and we can’t thank them enough."

Both Alston and Caldwell noted that the tifos have been excellent and a source of inspiration.

Last season’s artworks were inspired by Toto's "Africa," the movie Jaws and HBO's Game of Thrones. The first of 2015 poked fun at the New York Red Bulls and featured a matador saying, "Ole."

Pressed to pick a favorite, Alston named the "Nguyen-ter is Coming" design. Caldwell stayed neutral, noting that the fans have a skill that he doesn’t.

"They’re all great," Caldwell remarked, "They’re all very impressive. I couldn’t do anything like that, so it’s very cool."