United States Defeats Colombia 2-0 in Round of 16

In a strange game filled with cards, penalty kicks, and odd subs, the United States managed to pull out a 2-0 win and advance to quarterfinals.

Share All sharing options for: United States Defeats Colombia 2-0 in Round of 16

The United States defeated Colombia 2-0 after a series of unfortunate events took Colombia down to 10 players and saw their goalkeeper Catalina Perez sent off for taking out an onrushing Alex Morgan, to be replaced by Stefany Castano. Colombia was already missing starting GK Sandra Sepulveda on yellow card accumulation so this was the crap cherry on top of a crap cake for them.

The United States was no shining paragon of football either, managing two goals against a team that was down to 10 and missing not one but two keepers. Only one of those goals came from open play, an Alex Morgan power shot that managed to deflect into the net despite Castano getting a hand to it. The other was a penalty kick, finished calmly by Carli Lloyd.

Then there's the yellow cards, given to Megan Rapinoe and Lauren Holiday, both of whom were already sitting on one card each. They'll both have to sit out the quarterfinals against China.

Other than that, this was a game that could best be summed up with a quote from Fox commentator Ariane Hingst: "Why do you do this?"

Why, Coach Jill Ellis, do you ostensibly play a 4-4-2 with Abby Wambach and Alex Morgan up top and promptly limit their service by also playing Tobin Heath on the right wing? Why do your forwards never seem to connect, either with each other or with the midfield? Why did Tobin Heath pinch inside so much, leaving acres of pristine untouched land ripe for the taking while congesting the middle of the field? Why did Abby Wambach decide she needed to use her left foot against a cold third-choice goalkeeper and subsequently shank the shot? Why are there so many turnovers in the middle? Why have you banished Heather O'Reilly and Kelley O'Hara to various benches across Canada even though they are both known quantities who can provide speed and service along the flanks? What have you done with Amy Rodriguez? What the heck are you going to do without Megan Rapinoe, who is now forced to sit out quarterfinals on yellow cards? Why does this look like 11 talented individuals who are each trying to control one piece of a puppet without communicating to anyone else about it instead of a cohesive team?

The United States looked more interesting when Ellis subbed Morgan Brian in for Abby Wambach in the 69' which released Lauren Holiday to push up the field and attack as is her preferred role. Christen Press added to the increasing watchability factor with her sub in the 75', working better with Alex Morgan and sometimes combining with Holiday to move the ball up.

To be fair, the defensive line must be left out of the majority of criticism leveled at the team. Without its back line, the U.S. would be up a certain undesirable creek without a paddle. Becky Sauerbrunn and Julie Johnston are, at this point, both contenders to be the first woman on the American $10. Ali Krieger and Meghan Klingenberg have been solid, especially with Klingenberg's goal-line clearance against Sweden. They have kept the team at only one goal against in four games played and with goalscoring chances going begging, are more critical than ever to American success in the World Cup.

Will the United States Look Better in the Knockout Stages? 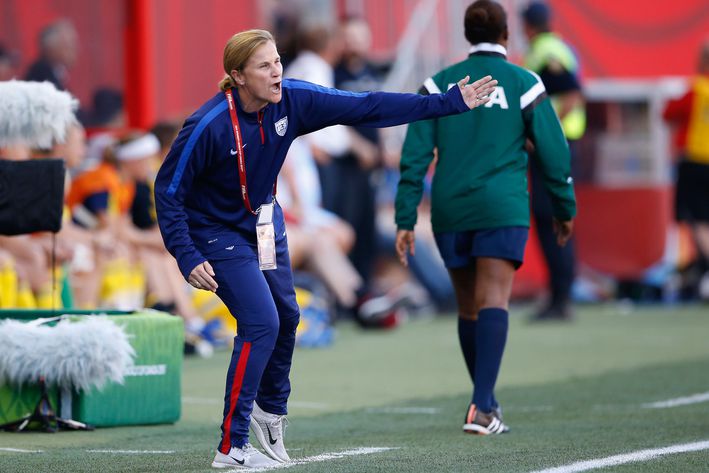 But we have otherwise come away from this game with more questions than answers. The team barely looks better than it did in group, although perhaps between this game and the quarterfinal round against China, you could argue that the real peak must come at semifinals. Should the United States advance to semis, their opponent will be either Germany or France, and for that game, pulling a few penalty kicks and muddling around the midfield until Alex Morgan gets ahold of the ball and does what Alex Morgan does is going to be very inadequate.

But without those penalty kicks, this would have been a narrow 1-0 game. The United States is still struggling in the final third and losing balls left and right in the midfield. Sooner or later that lack of finishing is going to see the U.S. trapped in a 0-0 game, pushed into extra time, and possibly taken to penalty kicks.

Losing Holiday and Rapinoe may finally force Ellis to turn to O'Reilly or O'Hara, either of whom could be exactly the difference maker the United States needs. Or Ellis could decide to start Lori Chalupny at left back, push Klingenberg up to the midfield in Rapinoe's palce, start Brian in place of Holiday, and keep Heath out right.

Whatever she decides to do, it's entirely possible that both O'Reilly and O'Hara could go through this entire tournament without ever seeing a square foot of pitch for the United States, and that's a damn shame given what either one could contribute to the team.