Boston meets coach Laura Harvey's side for the first time this season.

The Breakers return to Soldiers Field for a series of four home games in a row, starting with a visit from the Seattle Reign.

The Reign are sitting at #4 in the league standings with a 3-2-2 record and seven games played. The Breakers are sitting at #6 with a 3-3-2 record and eight games played, tied on points with the Reign and #5 FCKC, but behind on goal differential. The Breakers are also unbeaten at home and unbeaten in the last four after finally picking up a point away against the Washington Spirit. 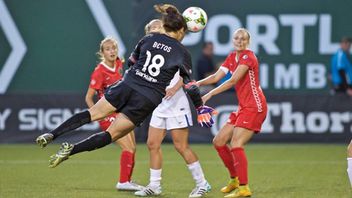 Stephanie Yang took a small detour from the Women's World Cup in Canada to catch an NWSL game in Portland. So naturally she saw a goalkeeper score in stoppage time.

The team lists Katie Schoepfer and Morgan Marlborough as probable in the latest injury report. Of the two, Schoepfer is a bigger concern based on her importance to the team's defense, but being listed at probable instead of questionable is a good sign. However, Marlborough needs to find an extra step in order to help the Breakers beat a Reign team that is very strong in the midfield.

"I think Seattle is still the marquee team of the league," said coach Tom Durkin. "They are highly dangerous in the attack through the prowess of Fishlock, who is a super strong player with or without the ball. And Kim Little, she's the marquee player of the league. Mariah Nogueira is doing really well in the midfield, along with (Keelin) Winters. That midfield is really solid. We have to try to get at their back line. We have to try to disrupt their buildup."

Reign coach Laura Harvey will no doubt be looking for ways to disrupt the Breakers' midfield as well—perhaps by going over it to get behind the back line, or overloading one side. Harvey is not averse to hitting the long ball from deep if the option presents itself, and could attempt to get strikers like Yanez in behind Kassey Kallman and Julie King, who have thus far proven to be a tough nut to crack.

The Breakers could stand to shore up their attack on the right since the great majority of their attack so far has been going through Kristie Mewis on the left. But with Brazilian international Rafinha away on World Cup duty, Maddy Evans could be the difference maker in the mid, either by getting stuck in with her signature tough play or by helping Mewis create attacking chances.

Other offensive options for Boston include Nkem Ezurike, Stephanie Verdoia, Suzane Pires, or possibly even shifting Rachel Wood forward. The Breakers may also decide to call up a reserve player to help Steph McCaffrey in the final third. McCaffrey's scoring numbers haven't been as big as they could be, which is no slam on her abilities—McCaffrey is shaping up to be one of the best rookies in the league—but she is working under the burden of having to be both provider and scorer. Too often she works her way deep into the attacking third, sometimes almost to the endline, but finds herself isolated. Even one more attacking player finding a run of good form could yield a big payoff for the Breakers.

Kickoff is at 4 PM ET on Sunday, June 21. The game will stream live on NWSL's youtube channel.