Will the United States Look Better in the Knockout Stages?

It's been a rough group D for the United States, but was it really a problem or was it by design?

Share All sharing options for: Will the United States Look Better in the Knockout Stages?

So the United States hasn't done all that well during the group stage of the Women's World Cup. Plenty of people, including me, have been despondent over how this bodes for knockout rounds. But is it really all gloom and doom? There are two things to consider here.

First, the United States weren't perfect in the 2011 World Cup group stage either. They advanced off a 2-0-1 record, missing out on all nine points thanks to a 2-1 loss to Sweden. Their other two opponents were North Korea (2-0) and Colombia (3-0), in which Heather O'Reilly scored this Puskas award nominee of a worldy.

North Korea was a hard game—as North Korea tends to be—but they weren't a serious problem, and this was the Colombia of four years ago, when upsetting France was just a twinkle in their eye. Lady Andrade hadn't even punched Abby Wambach in the face yet in 2011; now in 2015 she's racking up twitter RTs for her foot skills and gusto.

Compare four years ago to 2015 Australia and Nigeria, two teams who showed a lot of verve in group. Australia especially impressed after many (non-Australian) journalists predicted a middling tournament from them. Conversely, 2015 Sweden wasn't anything to write home about in their group game against the United States and yet it was a 0-0 draw, so it's a mixed bag now as it was then.

In 2011 the United States then went on to have an unnervingly exciting game against Brazil in quarterfinals, handled France with aplomb in semis, then lost it all to Japan. Things going a bit sideways in group isn't necessarily an indicator of performance for knockout.

The second thing to consider here is that not only is this tournament longer than 2011, it's also more spread out. Canada is nearly 30 times the size of Germany, and the United States has had to hopscotch from Winnipeg to Vancouver and now back over to Edmonton, a combined total of some 2100 miles. That, combined with an extra game in round of 16, could be contributing to the slow start for many teams. No one wants to go all out and lose steam at the wrong time. Do just enough to advance, then go HAM on your knockout opponents. A solid enough strategy, if that's truly what the United States is doing.

The evidence against this being a deliberate plan is pretty much almost every game they've played since World Cup qualifying until now. In the 14 games they've played since qualifying, they've gone 8-2-4, with wins against top 10 countries England and France (1-0 and 2-0 respectively) and losses to Brazil and France (3-2 and 2-0 respectively). They racked up big blowouts against teams like Argentina, New Zealand, and Mexico, confirming that if they really want to, they can put the pedal down against second- and third-tier teams. But their record against top tier teams is mixed.

So which is it: they were deliberately slow in group and they'll turn it on for knockout, or this is just the team as it is, warts and all? Little of column A, little of column B?

It's ridiculous to think that the United States deliberately played awkward formations and that Lauren Holiday and Carli Lloyd disappeared into the midfield in order for the team to save themselves for knockout. It's ridiculous to think that every single American forward was on the field at some point against Sweden but didn't score because they were hovering at about 80 or 90 percent. 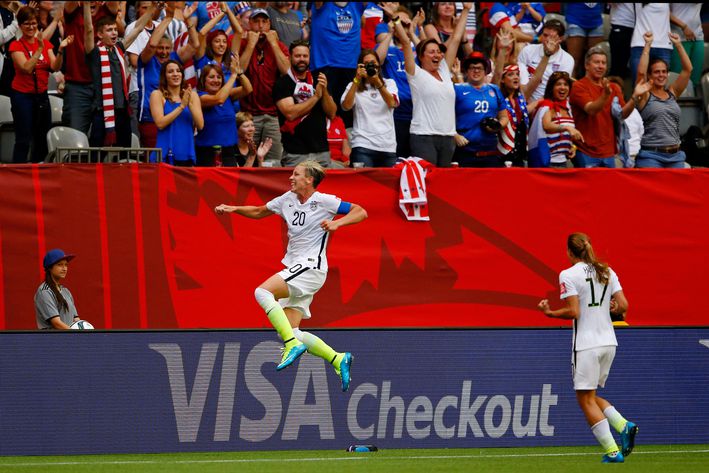 And yet Jill Ellis subbed Shannon Boxx and Christie Rampone for Megan Rapinoe and Tobin Heath after Nigeria went down to 10 players and the score was 1-0. She was content to risk preserving a 1-0 lead against 10 instead of pushing for a second goal and ensuring progression to the round of 16. That's certainly the epitome of "do just enough to advance."

This theory will be put to the test on June 22, when the United States plays Colombia in the round of 16. Despite the fact that Colombia upset France, that they have Andrade and Yoreli Rincon, that they have guts and heart aplenty, they still drew Mexica and lost 2-1 to England. On top of that they will be without their starting goalkeeper, Sandra Sepulveda, who is being forced to sit out for yellow card accumulation. If the United States looks anything like what they've looked like during group play, that's as good an answer as any.

The U.S. doesn't need to win in style, but it does need to win with a sense of finality. Not a close 1-0 game with several panicky moments that expose our weaknesses, but a solid, cohesive performance that announces the American's aren't so easy to break down after all. If they can do that and do it consistently, then they're almost assured a spot in semis, as their quarterfinal opponent will be the winner of China vs. Cameroon. That semifinal game will see them likely playing Germany or France for a spot in the final, and against either European power, they'll need the fire that was lacking in group. Let's hope it's just a switch that needs flipping and not a deep systemic problem rooted in an inept coaching staff that has mishandled players for months.