Farrell Could Be Rested in Open Cup

Andrew Farrell doesn't think he will start on Wednesday, but he's still excited for the US Open Cup game against the Charlotte Independence.

Share All sharing options for: Farrell Could Be Rested in Open Cup

Having played 1,350 minutes of a possible 1,440 this season, it’s odd to see a starting lineup that doesn’t include Andrew Farrell’s name. That might be the case tomorrow, however, when the New England Revolution open their US Open Cup campaign with a home fixture against the Charlotte Independence of USL. 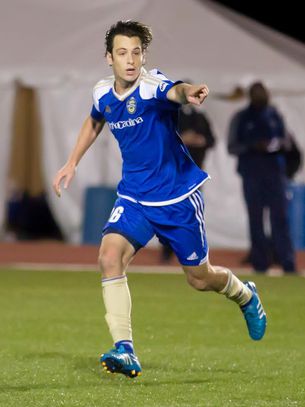 Wednesday’s game is the first of eight scheduled between now and the end of July for the Revolution. This upcoming week is particularly crucial as the Revs have a chance to capture first place in the Eastern Conference. With this in mind, Farrell might have a different view for the Open Cup game.

"We play DC on Sunday then we play a quick turnaround on Wednesday against Columbus then we come home to play Vancouver," Farrell explained to The Bent Musket. "[That’s] three of the best teams in the league in back-to-back-to-back games. I think Jay [Heaps] is probably not trying to use me [on Wednesday], but if it comes to that point I’ll be ready to go."

A natural competitor that always wants to play, Farrell has added incentives to get on the field on Wednesday.

First, it’s a rare game in Boston proper, which generates a different atmosphere than the team’s usual home at Gillette Stadium. The compact setup at Soldiers Field allows the players to feel the energy of the fervent supporters. It’s an environment that Farrell simply describes as "awesome."

Another reason that the defender hopes to hear his name called is because close friend Paolo DelPiccolo will be on the opposite team. The two individuals know each other well after years at Louisville University and a short time with the Revolution.

"He’s my best friend," Farrell said of DelPiccolo. "It’s always good to see him, whether it’s on the field or off the field. I always get excited when I play against him because he’s a competitor, he likes to win, and he’s a really good player."

Even if he doesn’t play on Wednesday, Farrell is confident that the team is deep enough to get the win. In fact, Farrell is happy to see reserve players get an opportunity to prove themselves in a competitive game after working so hard in practice.

With so many league games on the docket, Open Cup fixtures can sometimes get lost in the shuffle. That isn’t the case within the Revolution locker room as Farrell explained that the team is "100%" focused on winning the trophy.

The Revs, of course, won the competition in 2007 by downing FC Dallas. More recently, Farrell noted that the tournament provided special moments for D.C. United (2013) and the Seattle Sounders (2014). Having seen these moments from afar, Farrell now wants to experience it firsthand.

"To be honest, it’s a nice little bonus—winning the cup—so hopefully we can take that home this year," Farrell concluded.