You’d think that playing against your best friend and the team that released you less than two years ago would serve as extra motivation, but that isn’t the case for Paolo DelPiccolo. DelPiccolo, who currently plays for the Charlotte Independence of the USL, is approaching Wednesday’s US Open Cup game against the New England Revolution just like he would any other.

DelPiccolo Discusses Life After the Revs 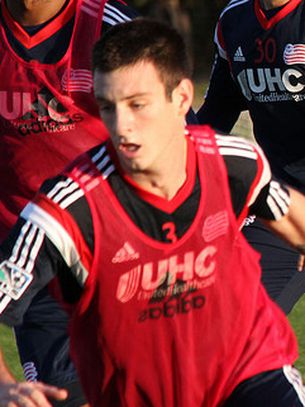 DelPiccolo spoke to TBM last year while he was member of Arizona United.

After short stints with Eintracht Frankfurt and the Montreal Impact, DelPiccolo was selected by the Revs in a Waiver Draft on Nov. 25, 2013. Less than three months later and after only 156 preseason minutes, DelPiccolo was on his way to a new club. Released on Mar 10, 2014, DelPiccolo was told that he wasn’t in the team’s plans. None of this, however, will be on on the player's mind when he steps onto Soldiers Field.

"I don’t hold anything against any coach that’s ever cut me," DelPiccolo told The Bent Musket. "I just want to win because I like winning soccer games. It wouldn’t matter if I was playing against the U-8 girls’ team around here or the New England Revs, I want to win the game."

Since leaving the Revolution, DelPiccolo has found regular time in the USL, first with Arizona United SC and now with the Independence. The consistent minutes, something he hadn’t found with his first three professional teams, has helped produce a more rounded player.

While happy with the Independence, the goal is to one day return to MLS. DelPiccolo is confident that he has what it takes to make it in the top tier of American soccer, going as far as to say that "as soon as I stop believing that, I’m going to stop playing soccer." The experiences from the last two years have only strengthened his conviction.

"I think I’ve definitely gotten better," DelPiccolo reflected. "I think I’m better than I was when I was with the Revs, but I don’t think I was out of my league at all. Things happen like that. Now I’m just in a position where I have to work to get back up there."

A win on Wednesday would certainly help DelPiccolo’s cause. To do this, however, the Independence must upset last year’s MLS Cup runners-up, a team that features DelPiccolo’s close friend Andrew Farrell.

The duo, also known as Salt n’ Peppa, became close while playing together at Louisville University. They have since separated but remain in constant contact, talking almost daily. Playing against each other in a high-stakes game is something different, but exciting, for both players.

While Farrell and DelPiccolo are known to make wagers, nothing additional will be on the line for Wednesday’s affair. Both individuals will be hoping that their team advances and gets one step closer to hoisting a trophy. While the intensity is certain to be high if DelPiccolo and Farrell share the same pitch, the pleasantries will return after the final whistle.

"I’m sure we’ll get together," DelPiccolo said. "I don’t know if we’ll switch jerseys or anything, but I’m sure we’ll hang out a lot while I’m up there."

Could a Salt n’ Peppa reunion show be in the works? Don’t completely rule it out.

"You got to talk to Andrew about that," DelPiccolo joked. "If you can get that setup, you know I’m always in."