Unflattering media portrayals are just a signal that coverage of the women's game is evolving.

Former USWNT coach Pia Sundhage gave an interview in the spring to the New York Times in which she candidly assessed some of the team's big-name players.

Carli Lloyd? She's a confidence player. Abby Wambach? She should be a sub. Hope Solo? Has caused trouble.

The reaction from American woso media and fans was instant. Wow, Pia, way to come after your old team. Here we thought we left things on good terms. Guess that breakup was more acrimonious than we thought? We're totally keeping your ABBA mixtape.

But, in the modern parlance, did she lie? Lloyd's performance can wax and wane like any player's, and if Sundhage's assessment is that during her tenure it waned when Lloyd perceived coaching staff were losing faith in her, what's wrong with acknowledging that? Abby Wambach should be a sub as she's clearly not a 90-minute player anymore. And as for Hope Solo, anyone denying she hasn't caused her fair share of consternation in the media and the USWNT camp either is lying or lives in a dystopian Mad-Max world with no wifi. 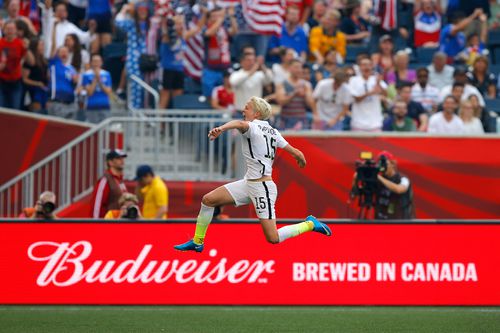 The US beat Australia in unconvincing fashion to kick off their World cup campaign.

The only issue here is the timing of it all, coming right after the United States stuttered their way to a 3-1 victory over Australia in the opening rounds of Group D play. But Sundhage gave the interview in the spring during Champions League and the Times made the decision to save it until now for maximum clicks. Other than that, there's nothing wrong with a coach candidly assessing her former team when a reporter asks her a question.

In its own way, this is progress in terms of media coverage of the women's game. It's not all puff pieces about someone being the pride of their medium-sized hometown. Reporters want to go deeper, and sometimes that means asking for honest opinions instead of glossy pablum. The women's game has grown up, and media coverage needs to grow with it.

What is the danger if not all of the stories about the USWNT are flattering portraits of American heroes? That the players and the team will seem like real, fallible human beings? If in an interview someone says something factually false, the great thing about the internet is that there's about a thousand and one people ready to correct them and provide sources. The rest is just opinions, and bad opinions about the United States are best dealt with by pointing to what's on the field. We've got great players who can post incredible results. If the team sometimes falters, burying our heads in the sand is not going to make the problem go away. Better to confront the bad head on instead of trying to stick to a narrative.

And anyway, Pia, that's just like, your opinion, man.