Jermaine Jones has already seen some time out this year and appears to have more time on the sidelines ahead of him. The worst part? The midfielder says this injury is a lot more painful than his last one.

Many may perceive the New England Revolution allowing a 1-0 lead turn into a 2-1 first half deficit to be Sunday’s most dour moment, but the toughest one was probably seeing Jermaine Jones go down in considerable pain. 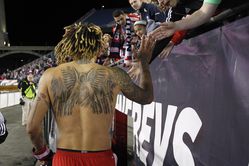 The US national team midfielder ran upfield after a clearance and did not have a Galaxy player within ten yards of him. There was no awkward twist on Gillette Stadium’s turf, but the 33-year-old went down nonetheless. A non-contact injury caused him to immediately signal for a sub, and just like that his night was over.

"I have no idea what happened," Jones said. "I felt the same that I got before the surgery and this time I feel it a little bit more than before I got the operation. I cannot move and put my leg up, so I feel that I am not able to keep going."

This is the second injury of the year for Jones, as the veteran previously had to spend some time out at the beginning of the season due to a sports hernia surgery. However, Jones is feeling worse off now than he did in the season’s early-goings.

He was seen limping in the locker room post-game and all that awaits now is a scan that hopefully will reveal fewer weeks out of commission than fans are currently envisioning.

"I knew the pain I got before was not so much pain as I have right now," Jones said. "I knew that something happened and now we have to take some pictures tomorrow and see how bad it is."

Complicating matters is the fact that Jones was called up the U.S. national team prior to the 2-2 draw with the Galaxy. He was set to be a part of Jurgen Klinsmann’s squad that will face the Netherlands and Germany in a European-based camp.

At this rate, Jones, who said post-game that he’s already been texting Klinsmann, seems unlikely to feature. While those prospects surely are discouraging for him, the hardest part lies elsewhere.

He was just starting to round back into form in the midfield and now has another injury setback to battle. The final result of the injury awaits, but the midfielder could very well be on the sidelines for weeks to come.

"It’s really bad and I don’t feel really good with it," Jones said. "I worked to come back and feel good and now I have more pain than before. Nobody is happy with that and it’s not good."