On Saturday, the Revolution hosted the undefeated New York Red Bulls--and left Gillette Stadium with a hard-fought three points. Who deserves Man of the Match honors? Vote below.

Goals from Charlie Davies and Teal Bunbury lifted the Revolution to a memorable 2-1 victory over the New York Red Bulls. Among all 14 players who appeared for Jay Heaps, who stood out the most? Vote for your Man of the Match below.

Nick - 7:  Only second-guessed one decision all night long--and Sacha Kljestan made him pay. Otherwise turned in another strong outing, highlighted by a crucial stop on Felipe late in the second frame. Jon - 6.5:  Got bested by a great piece of skill from Kljestan, but otherwise showed pretty strongly throughout the night. Held shots when he needed to and continued to command an evolving back-line.

Nick - 4.5: Certainly not his best day. Sub-50% passing, coupled with average service, led to a rare quiet night for Tierney. Took a couple poor touches early and never seemed to recover, allowing Kljestan to have his way on the left flank. Jon - 5: The Revs' longest-tenured player has had better days, but Saturday's performance wasn't awful by any stretch of the imagination. He was relatively solid defensively, but was lacking the spark upfield that fans are so accustomed to.

Nick - 7.5: Mike Grella should have scored after losing Farrell late in the first half, though the Revs center back benefited from an otherwise stellar outing, amassing a whopping 9 clearances. Didn't miss a step when Jose Goncalves entered as his defensive 'mate. Jon - 7.5: He just keeps on growing with every passing week. As there are with any defender, there were moments when Farrell could have been better. In spite of that, there is little to be upset about.

Nick- 7: Six clearances and 3 interceptions pay tribute to another strong outing, though Jones endured a handful of nervy moments. Just wasn't as sharp as he was in previous CB performances; only completed 65% of his passes. Jon- 6.5: Jermaine got into things after the game and that fire was missing during the game. It usually is there and is the only reason why his ranking isn't any higher. Hopefully he can move up into midfield permanently like at the end of the match.

Nick - 7.5: More and more impressed with Woodberry's service each week. Served up a flawless ball to set up Davies' early goal. Needs little-to-no space to whip in crosses, which left the NYRB back four scrambling on multiple occasions. Woodberry has turned into an absolute revelation for Jay Heaps in 2015. Jon - 7.5: What a ball from the right back on Davies' goal. He showed a willingness to get forward, was pretty tidy in possession, and held his own once again. His case is getting stronger each and every week. 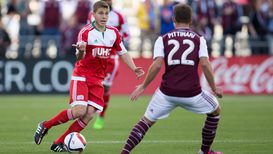 Read more about Caldwell's consistent campaign--and vote for your PotM.

Nick - 8.5: Scotty just never falters. His defensive numbers--5 tackles, 5 interceptions, 3 clearances--signify his ability to clog up the middle with physicality. Spent most of the match sitting in front of the back four, but also effectively pushed forward to help the attack maintain possession. Another great outing. Jon - 8: Scotty does so many of the little things right. It seems to be the same narrative every week and it held true once again against New York. Such a strong player.

Nick - 5.5: Typical Andy Dorman night. Stood strong defensively and forced a handful of turnovers, but also picked up a silly yellow for an all-too-familiar professional foul. Could have helped his club keep possession with tidier passing (72%). Jon - 6: Not too much to write home about Dorman's performance. He got another yellow card for an avoidable foul around midfield, but otherwise was quietly effective.

Nick - 6: Looked explosive for most of the match, but seemed too infatuated with the dribble, particularly in the second frame. Though he still turns the ball over too much, his aerial game has become a real threat for the Revs. He tracks back, too. Jon - 6.5: Agudelo got baited into several fouls against the smaller Connor Lade, but was solid outside of that mark. He showed a willingness to beat people on the dribble and put in yet another solid performance.

Nick - 5.5: I want to believe in Rowe, though he so often struggles to find the rhythm of the match. Connected on 80% of his passes (positive) but seemed mesmerized by Dax McCarty, both offensively and defensively, throughout his shift (negative). Would like to see him start stronger so he can impact matches in the second frame. Jon - 5: Dax McCarty had his way with Kelyn on Saturday. That's not really an insult considering just how good Dax has been this year, but still I'm left wanting more from Rowe.

Nick - 7: Bunbury is so often the hardest working player on the pitch. He tracks back with pace, pushes forward with energy and (in this match) runs over the opposition with physicality. Loses a point for sloppy passing (56%) and an unnecessary yellow, but earns 7 for turning a hard-fought shift into a game-winning goal. Jon - 7.5: Good finish on the goal and another solid defensive performance. Could have had another goal late in the game if his first touch was cleaner, but well done Teal.

Nick - 8: Charlie does all the little things so well. After scoring another header--his third goal in as many matches--he opted to keep the attack moving forward by saving a loose ball, a play that ultimately ended in Bunbury's game-winning tally. Hold-up play has revolutionized the attack this season. Jon - 8: Great headed finish on Woodberry's cross and solid runs throughout the game. He tested New York's young back-line and is starting to round into form. Three goals from three games now is not a bad haul at all.

Nick - 6.5: Came out firing on all cylinders, immediately flashing his skill over the ball, and made a crucial final pass that set up Bunbury's goal. Unfortunately, Nguyen seemed to press too hard in the waning moments, losing possession when the Revs so desperately needed to hang on. Jon - 6.5: Lee provided a spark when he entered the field and set up Teal's insurance tally. The attacking midfield spot is clearly his and hopefully he'll be ready to start next week.

Nick - 6.5: Couldn't have asked for much more off the bench. Marked well on set pieces, stood strong in the air and held his own 1v1. Crucial sub pulled Dorman (and his yellow card) off the field, enabling Jones to return to the middle of the park. Jon - 6.5: After missing some time through injury, the big man came into the fold late when New York started throwing attacking players on. He defended well, got up in the air, and held his own. Good performance from the captain.

Nick - 5.5: Brought great energy into the match, but like Agudelo, took too many touches before distributing. Tough to make an impact in such an abbreviated showing. Jon - 6: Diego came into the match with abundant energy and commitment, but it didn't quite materialize into something productive. In spite of that, he still put in some solid relief minutes.