It's a battle for first place in the Eastern Conference as the New England Revolution welcome DC United.

It's a battle for first place in the Eastern Conference as D.C. United travel to Gillette Stadium for a Saturday night fixture against the New England Revolution. 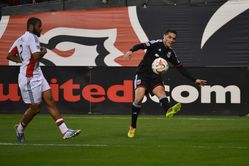 Looks like DC United will be missing some big names.

The Revs are coming off a midweek thrashing as they were downed 4-2 by Sporting Kansas City on Wednesday. The team will hope for a better result against United as they will likely be welcoming back Bobby Shuttleworth, Andrew Farrell, and Charlie Davies to the starting lineup.

D.C. United are also coming off a loss as a late-game winner gave the Philadelphia Union full points last Sunday. The game epitomized Ben Olsen's "grind it out" style, though they were on the wrong side of the result this time. If United are going to avoid losing two straight, they will be doing so without some big names as Fabian Espindola and others are listed as out on the most recent report.

Join us as we discuss today's match.