Diego's got a new haircut & Jose almost got a goal. Read about it in the notebook.

Diego Fagundez has a New Hairstyle 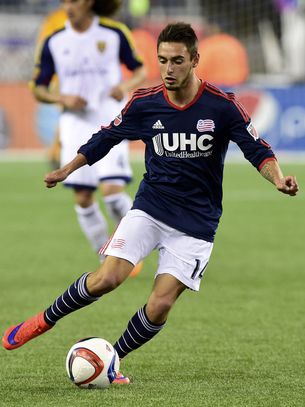 Fagundez talked to TBM after not making Uruguay's U-20 roster.

When Fagundez debuted for the Revolution at the ripe age of 16, you could tell that the kid had a certain flair. Playing in his first MLS regular season game, the mohawk-laden teenager scored a goal and drew a penalty against Chivas USA. The style showcased on that day—both personally and as a player—has become a trademark for Fagundez.

On Saturday, the now-20 year old unveiled a new look as he has a blonde strip in his hair similar to New York City FC’s Khiry Shelton. Playing-wise, Fagundez also showed some bravura as he nearly had a game-winning header.

Asked about his new hairstyle after game, Fagundez claimed it's all part of being ahead of the fashion curve.

"I like to be different and I just came up with something that no one has," Fagundez said. "I want to see if it works out for me."

In the third minute of Saturday’s game, Goncalves took a pretty audacious shot that nearly ended up in Toronto FC’s net. The opportunity was created when Chris Tierney’s cross was headed away by Michael Bradley. Positioned at the top of the box, Goncalves hit a left-footed volley that made its way through the crowd before hitting the post.

Now in his third year with the Revolution, Goncalves has collected three goals. Despite this, Goal of the Week honors have proven to be elusive. The center back was a bit bummed that his shot on Saturday was denied because he felt he could have finally won the weekly accolade.

"Maybe it could have been Goal of the Week, huh? I was a little sad," Goncalves joked. "I saw the ball coming and either I hit it very good or it goes over the bar."

Since taking ownership of the right back spot, Woodberry has been sensational with few missteps. On Saturday, he finally made a slip-up as his header back to Bobby Shuttleworth wasn’t strong enough. Ultimately the netminder neutralized the danger and no damage was done.

After the play, Shuttleworth showed more emotions that Woodberry. It’s not because the former FC Dallas homegrown wasn’t affected by the play. Rather, Woodberry knows that he can’t dwell on mistakes.

"You have to have a short memory and just put it behind you real quickly," Woodberry explained. "Soccer is a game of mistakes, so everybody’s going to make them and once you make one, if it doesn’t hurt you too bad, then move on with it."