For Diego Fagundez, it was disappointing to not be selected by Uruguay ahead of the U-20 World Cup. However, the midfielder is now more motivated than ever before.

It’s often said that adversity reveals character. If that’s truly the case then Diego Fagundez is currently engaged in a defining moment. 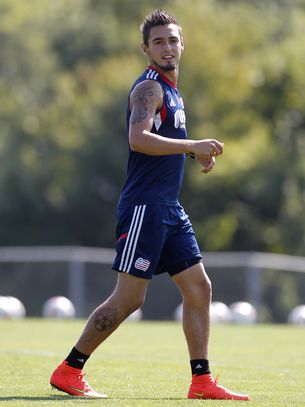 This week, Uruguayan U-20 national team coach Fabian Coito named his 21-man roster that will compete in the World Cup. The final list did not include Fagundez. It was difficult news for the New England Revolution midfielder, who closed doors with US soccer in order to pursue a future with Uruguay.

"It’s tough, you know? Everyone wants to go to the World Cup," Fagundez said after Saturday’s 1-1 draw with Toronto FC. "Of course everyone just tells me to keep my head up because there’s still a lot to be played."

After spending time with both US and Uruguay youth teams, Fagundez became cap-tied to his birth country when he participated in the South American Youth Championship. The choice appeared to be a good one as Fagundez contributed goals and assists in tournament tune-ups. Once the actual event began, however, Fagundez found it difficult to get meaningful minutes.

Still, Fagundez, who had 13 goals and seven assists in MLS in 2013, hoped to make the final World Cup roster. It wasn’t to be, however, as Uruguay will travel to New Zealand without him.

Fagundez hasn’t heard from Coito about the decision-making process, but he has gotten a lot of support from his teammates and the Revolution coaching staff. The kind words that he has received have helped him through this difficult time.

"We were heartbroken for him because I think he really wanted to go," Head coach Jay Heaps commented. "He’s handled it really well and put all of his focus on us."

Fagundez hopes that this focus will parlay into a return to the starting lineup. After serving as a starter for the first two games of the season, Fagundez spent the next two stuck on the bench before making six consecutive appearances as a substitute.

These cameos only amounted to 79 minutes, which is a far cry from the previous two seasons when Fagundez was a regular starter. With his U-20 World Cup ambitions now in the past, Fagundez has his full concentration on becoming a first-choice contributor again.

"It gets me hungrier," Fagundez said of the omission. "Now I just want to keep playing and try to get back in the starting eleven and hopefully get more minutes and do something to help out the team."

This isn’t to say that Fagundez hasn’t been helpful in recent weeks as he’s provided some brilliant moments off the bench. Against the Philadelphia Union, Fagundez assisted on a Teal Bunbury goal. One week later, he almost had a tally of his own but his shot bounced off the crossbar. His most recent outing featured two shots, including a potential game-winning header that went just wide.

If Fagundez becomes a regular on the score sheet, he should be break into the starting lineup. After that, who knows? Maybe more time with the Uruguay national team.

"This doesn’t stop me," Fagundez said. "I just need to keep growing as a player and hopefully later on things will come."