Revolution and Toronto FC Battle to a 1-1 Draw

The Revs nabbed a first half goal, only for the Reds to find an equalizer in the second half through that secured one point for each team.

Share All sharing options for: Revolution and Toronto FC Battle to a 1-1 Draw

The New England Revolution’s unbeaten streak was pushed to nine games on Saturday night, as the Revs drew Toronto FC 1-1 at Gillette Stadium before an announced crowd of 24,269 fans. 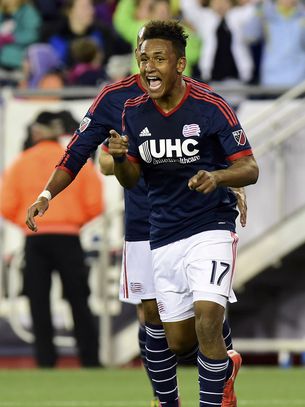 The game also marked the Revs’ second straight draw and things started off ambiguously for the boys in red, white, and blue. Jose Goncalves volleyed a failed TFC clearance off the post and past an outstretched Chris Konopka, but the Reds saw several strong chances come their way in the match’s early goings.

Toronto’s DP trio of Giovinco, Michael Bradley, and Jozy Altidore all saw promising shooting opportunities fall their way, but a combination of poor finishing and Bobby Shuttleworth’s astute presence deterred all of their efforts.

After failing to capitalize on what appeared to be several guaranteed goals, matters got worse for Toronto when Altidore was removed from the game with an injured hamstring, after which the tide began to turn in the Revs’ favor.

The first strong Revs chance fell by way of Charlie Davies, who was slipped through by a Teal Bunbury headed flick, only for Konopka to make a strong punch wide of frame. Shortly thereafter, Juan Agudelo unsuccessfully attempted an audacious chip from range, but the forward’s ardent pursuit of a goal continued when the 32nd minute rolled around.

After a patient bit of combination play near the attacking right corner flag, right-back London Woodberry found himself with enough space to whip in yet another tantalizing cross into the danger area. Both Davies and Agudelo pursued the bending service, but it was the latter who got his head on the end of it for his third tally of the year. The goal proved to be the last serious action of the half and the Revs carried a 1-0 lead into halftime.

When the teams emerged from their respective halftime talks, the momentum carried in the Revolution’s favor, albeit for a brief period of time. Davies saw Konopka brilliantly deny him twice more and the Revs would shortly rue both denials.

Much like in the first half, Bradley and Giovinco combined with aplomb in the 53rd minute. The former collected a pass from the Italian, went on a crusading dribble through several Revs defenders, and slammed home a shot into the far corner past Shuttleworth’s extended arms.

Bradley’s finish propelled his entire squad and him individually, as another stellar scoring opportunity fell his way almost immediately after. He found himself again on the right hand side and forced Shuttleworth into a fantastic save that fell into the path of Luke Moore. The English forward finished into the open net, but the assistant referee correctly waved the goal off through an offsides violation.

As the half wore on little else was in the offering until the 85th minute ticked away, as chances started popping up at will for the Revs. The first arrived when Nguyen drove at the heart of Toronto’s defense, spotted a defense-splitting run from Andy Dorman, and Konopka conjured up yet another stone-cold denial of a Revolution player.

As time slowly ticked away, golden chances fell to both Nguyen and Fagundez, but neither could capitalize on their chance to secure three points at home.

The Revs have a now a have short turnaround ahead of them, as they travel to Sporting Park to take on Sporting Kansas City on Wednesday night.