Should Jermaine Jones Play against the Crew?

Jermaine Jones is on the road to recovery, so what should his role be this Saturday?

Share All sharing options for: Should Jermaine Jones Play against the Crew?

By all accounts, Jermaine Jones is making significant progress on the injury front, which could lead to an appearance in this weekend’s game against Columbus Crew SC.

The New England Revolution midfielder, who underwent sports hernia surgery during preseason, was upgraded to questionable on last week’s injury report. He even traveled to Colorado, though he didn’t make the game day 18.

Since then Jones has continued to make gains. Head coach Jay Heaps told RevolutionSoccer.net on Apr. 7, "We’ll see how the next couple days go in terms of how many minutes (he can play) or if he’s in the squad."

With this in mind, should Jones play on Saturday? 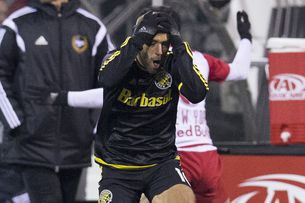 The Crew are logging a lot of travel time this week, and that's a good thing for the Revs.

Having Jones’ 2015 season debut at home would be a nice touch for the player and fans. Since arriving to New England, Jones has developed a positive relationship with the Foxboro Faithful, always paying respect to the Fort or posing for pictures.

More than a sentimental gesture, playing at home would bring a certain level of comfort. This weekend’s game doesn’t require any additional travel or adjustments, and although Gillette Stadium is a turf surface, Jones now knows it well.

The opponent also needs to be considered as the Revolution will be facing a road-weary Columbus. After their bye week, the Crew traveled to the Vancouver Whitecaps on Wednesday, playing to a 2-2 final. Kei Kamara netted two on a night where star players Ethan Finlay, Justin Meram, and Kamara went 90 minutes. The Crew, who could be without Wil Trapp, now have to venture across North America to face the Revs.

That said, the Crew are a fierce opponent that can play a physical style. Last year, Heaps noted that Crew players appeared to be targeting Jones’ injured foot. Tony Tchani denied these allegations but also claimed that he's a "strong guy" who’s "up for the challenge" of tracking Jones. If there are any concerns that Saturday’s game might turn hostile, Jones should be kept off the field.

Furthermore, the midfield has performed well in recent weeks, which could buy Jones more time. Scott Caldwell has been relentless playing alongside veterans Andy Dorman and Daigo Kobayashi. Kobayashi in particular has been strong, offering smart defensive positioning and sharp offensive passing. The Japanese midfielder missed last week’s outing against the Rapids, but could be ready this weekend.

My take is that Jones should be used as a substitute on Saturday, which would serve as a gradual return to the field. Jones could come on at halftime or later, depending on how he feels. Next week the Revs travel to Philadelphia, which is a difficult place to play despite the Union's poor start to the season. Jones' experience and skill could prove to be quite valuable against the Union.