FCKC transplants Morgan Marlborough and Kassey Kallman talk about their dogs, adjusting to Boston, and connecting on the field.

Q: How are your dogs?

Kallman: They're awesome. We really missed them when we were in Florida. We were gone for eight days and we really struggled. But we got a lot of pictures and we facetimed them.

Q: Who has the cuter dog?

Kallman: I really do but I wouldn't tell Morgan that.

Q: Morgan, you scored a goal against Jamaica. From the vine the Breakers put up it looked like the Jamaican goalkeeper kind of spilled it. You see as soon as Bianca Brinson took that shot you just took off before you even knew it was going to rebound. Is that your mindset every time you're in the eighteen?

Q: Coach Durkin seems to be rotating you, McCaffrey, and Ezurike through that nine spot, so is that increasing pressure on you to score and earn a starting position?

Marlborough: Definitely. You know, you're always trying to make an impact on the team and as the lone striker you're expected to score. That's something that I'm always thinking about doing.

Q: A couple people have told me Durkin wants you guys getting the ball forward quickly, so how are you doing connecting with the midfield?

Marlborough: I think I'm doing a pretty good job. I think that he helps that with practice, the way he sets us up. There's always an attacking midfielder right underneath so whenever the ball's played in I always have support, so that support definitely helps me.

Q: The Breakers, so far, haven't been great about converting on set pieces. Do you think that's going to change with you coming into the setup or is that something you're working on at all?

Marlborough: I think that as a team we've been pretty good at that. Against Jamaica we scored multiple set piece goals. We've had a few corner kicks, we've had some headers off free kicks, so I think that's something we'll be good at.

Q: Has transitioning to Boston been easier with Kallman coming along with you?

Kallman: Roomies. We roomed together in Kansas City.

Marlborough: When I heard I was getting traded, after he said it, he was like ‘oh yeah, Kass is getting traded with you.' I was like yes! Let's go, let's take the dogs, let's go. 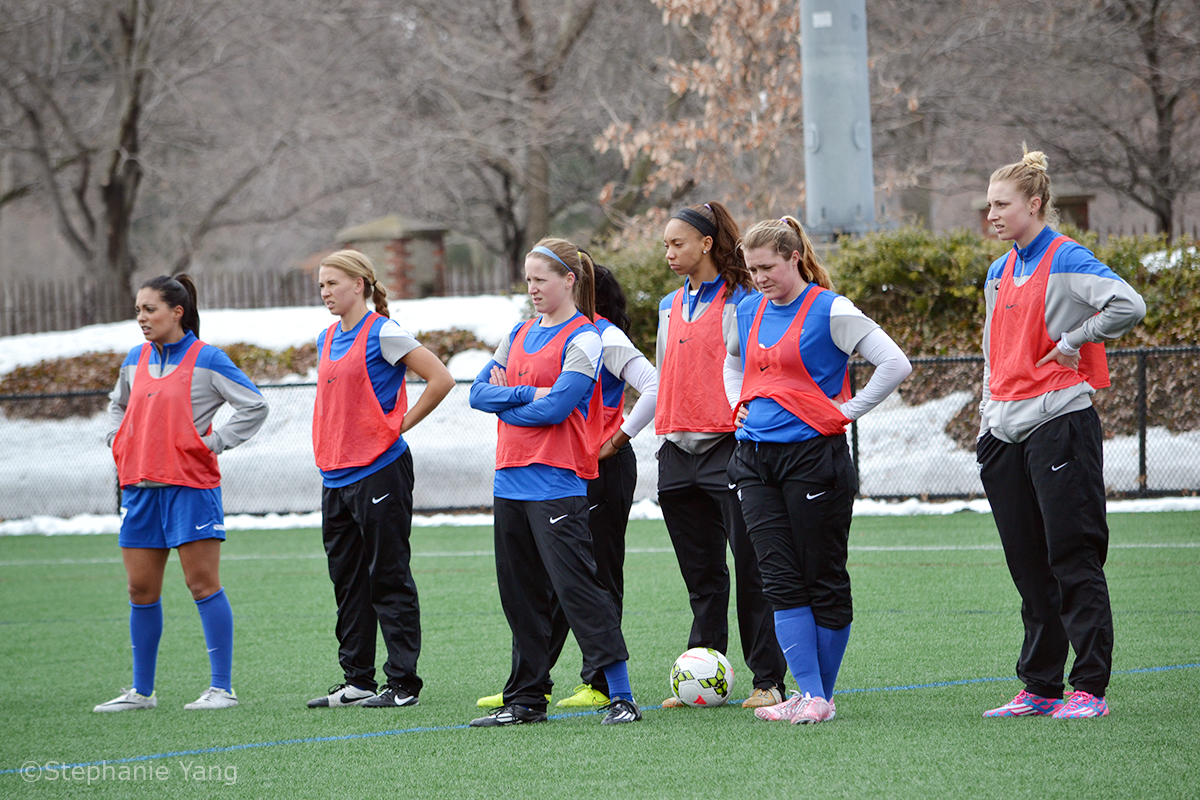 Q: Kassey, you played at Florida State with Jamia Fields. What's it like reuniting with your teammate?

Kallman: It's awesome. It's awesome going to a different team and knowing someone so well. I could tell you everything about her game and she could tell you the same thing about me, so having someone that you have that connection with, you know. I'm just happy that I could be here when she's coming on and help her transition as well, being a rookie coming into a new team.

Q: With you in the back line you've got Morgan and Jamia obviously up front. Long ball's kind of looked down on, but some coaches have said it's an important tool and if you have the long ball you can hit it. Is that something you guys are working on out of the back?

Kallman: Yeah. And I don't think it's really necessarily looked down upon, it just has to have more of a purpose.  When you're growing up and you hit a long ball you don't have a direction, but for us it's, you're finding someone long and you're putting it on their foot or putting it in their space. So definitely looking to our topmost attack right away is something that we're looking to do and something that we're working on.

Q: At Kansas City you played on the wing a little bit. Here it looks like you're going to be paired centrally with Cat Whitehill or maybe Rachel Wood. If you had your preferences?

Kallman: I enjoyed outside back but I feel more comfortable at center back. I played there the last two and a half years at college and I'm happy to get back in that spot.

Q: You've been in the youth system. You won a U-20 World Cup in 2012. The national team currently has some pretty good central defender options but with Christie Rampone and maybe Rachel Van Hollebeke retiring or rotating out is that something you have your eye set on?

Kallman: Yeah, definitely. I've gotten feedback at camps and I've talked to Jill Ellis. I think I'm being looked at for outside back and center back so that's why I want to keep sharp on both positions.

Q: How's the winter been treating you guys?

Marlborough: It's all right. The snow's melted so we're good to go now.

Q: Last question. I try to ask everybody this at the end of the interview. It's the zombie apocalypse.

Kallman: Oh gosh, I heard that this was a question.

Q: Who on the team is first to go and who leads you all to safety.

Kallman: Steph Verdoia's first to go. She's always just, you know, whoo, whatever. She's gonna go first. And I think that...oh this is a hard one.

Q: You can make team-ups. McCaffrey and Mewis said they'd team up at the end of the world.

Marlborough: I think Shep's [Katie Schoepfer] going to be the last one standing.

Kallman: Shep would be a good leader. I'd follow her. And I would agree, I heard some people said Maddy because she's super nice and she'd be trying to help people and save people. So she might go while trying to help save someone. So she would go with good morale.