Juan Agudelo Named to Team of the Week, Nominated for Goal of the Week

Share All sharing options for: Juan Agudelo Named to Team of the Week, Nominated for Goal of the Week

One week after Kelyn Rowe was named as MLSSoccer.com's Player of the Week, Juan Agudelo has been named to the website's Team of the Week and earned a Goal of the Week nomination. 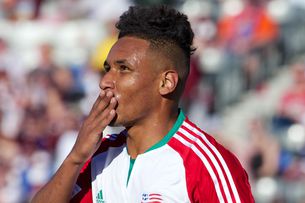 Did that Juan Agudelo goal look familiar? It should have since it was vintage Revs.

Agudelo grabbed his first of 2015 this weekend against the Colorado Rapids. Heading into Saturday, Agudelo had been held scoreless despite taking nine shots. That changed in the 18th minute when Agudelo took down a charming Rowe cross before flicking the ball past goalkeeper Clint Irwin.

The goal was classic Agudelo and it was selected by the league as a Goal of the Week contender. Agudelo will face stiff competition in the form of Toronto's Benoit Cheyrou, Chicago's Joevin Jones, Seattle's Obafemi Martins, and Salt Lake's Javier Morales. Those interested in voting for Agudelo can do so here.

Agudelo wasn't the only New England Revolution to earn plaudits by MLSSoccer.com as Bobby Shuttleworth was named as a reserve for Team of the Week. Shuttleworth made five saves en route to earning a shutout. The Revolution goalkeeper was beaten out by Bill Hamid.