Breakers goalkeeper Jami Kranich discusses becoming a starter, working with her back line, and of course, zombies.

Q: Congratulations on two shutouts against Jamaica. How did it feel?

Kranich: It was awesome. Just getting a chance, even in a scrimmage, to play with all the girls, it was great.

Q: Last year I heard the two very first people to buy parking passes from the Armada supporters group were your parents. Are you excited to have them come see you play this year?

Kranich: Yeah, that was one of the great parts of me coming to Boston. I live two hours from here and they're definitely planning on being here for all the home games.

Q: Obviously Coach Durkin hasn't quite settled on a back line yet. Is having that back four rotating in front you a distraction? Are you adjusting? Is it good for you?

Kranich: Well just playing with the girls you learn the qualities of the players. I don't think it's that big of an adjustment. I mean, everyone has their own strengths. The outside backs are looking to be really fast. But our center backs are kind of the same type of person - strong, able to control the ball and try to switch the field - so it's not that big of an adjustment.

Q: And you've trained with them all last season, so are you bringing that into this season?

Kranich: Yeah, definitely. Just playing and practicing you can tell. I mean I think we looked pretty strong to begin with. We did really well against Jamaica. And last year, we're just building off of that.

Q: Julie King in an interview had very complimentary things to say about you. She said you've come a long way since preseason of last year. How do you think you've evolved as a goalkeeper and how do you keep evolving without getting regular minutes in a game time situation?

Kranich: I mean, I think last year, it's like the freshman thing. You come in, you're scared, you don't really know what's happening. So I think this year I knew what to expect so I came in with that confidence and I knew what I was going to be facing at practice, Tom's style of play. Just giving a hundred percent in practice every time.

Q: So, Cat Whitehill, she's as veteran a defender as they come. Are you working with her in particular to develop with the back line?

Q: What's one thing you've learned from her so far?

Kranich: She doesn't like when I don't communicate specifically enough with her. I've learned that I need to tell her not just a broad thing, like "man on." I need to be like "she's coming from the right, she's coming hard." Just communicating better.

Q: You're kind of untested in NWSL. That's going to change this year. You might expect reporters to constantly ask you, "What are you going to do to prepare." So if you could issue a blanket statement, what would you say to everybody about being a young, unblooded goalkeeper and your performance this season?

Kranich: It's a whole new league. I haven't played in a game that matters this much since senior year in college. I'm confident that I've become a lot better since I started training here last year and the girls that you said - Julie - I've had multiple comments from people on the team saying how well they think I've developed. So I mean, just bringing the confidence that I have from training into the game. Try to kick some butt. 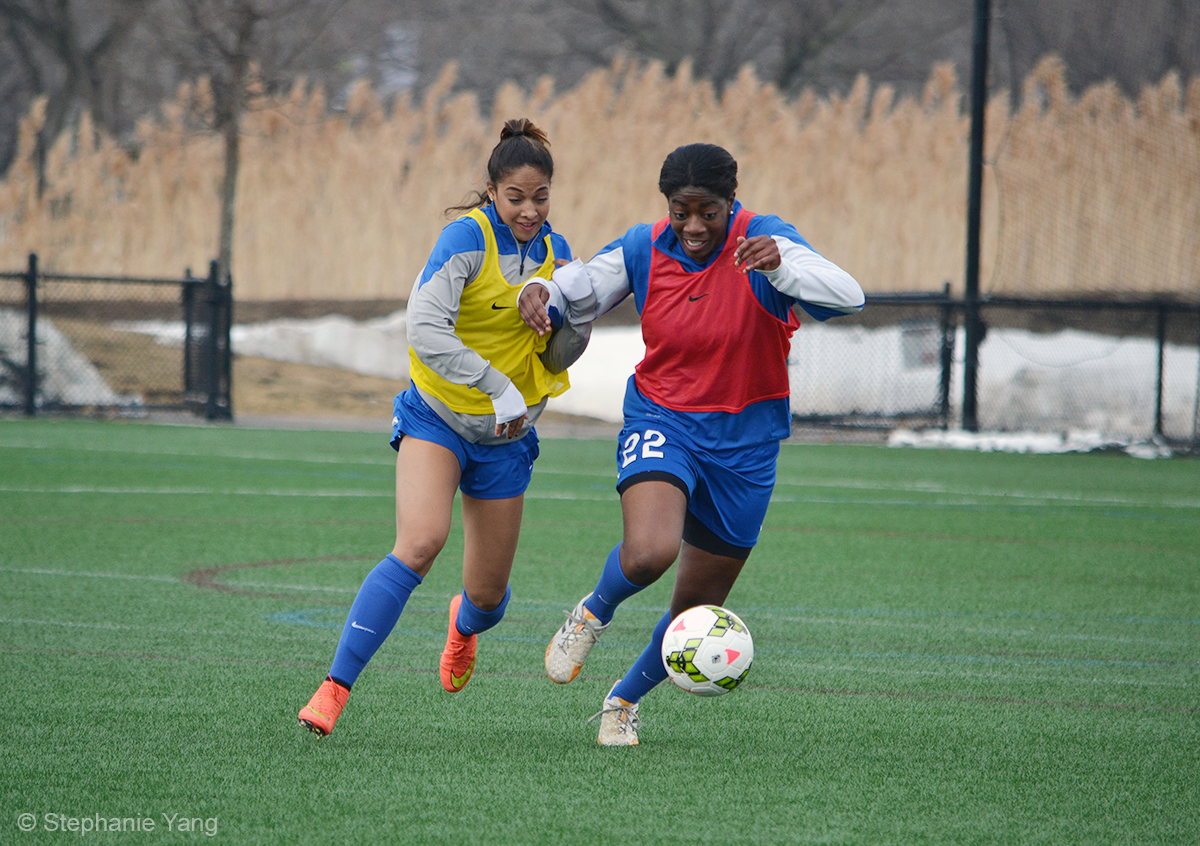 Q: Last question. You've had a lot of time to think about this and it sounds like you decided. Zombie apocalypse: first to go, who leads the team to safety.

Kranich: Well I was going to group the Brazilians together. They might be a little confused. We're gonna be like "Ah, the zombies are coming" and they're gonna be like "Zombies? Que?" But I think more specifically I would have to agree with Nkem [Ezurike] and say Rafi [Rafinha]. She's a pretty chill person and doesn't really seem on edge as much. I would like to say I would lead the pack  just because I feel like I'm resourceful but I think Molly [Pathman] would be a leader because she's really smart.