Good news for Revolution fans as Jermaine Jones has been upgraded to questionable on the most recent injury report.

The latest injury report for the New England Revolution brought good news for fans as Jermaine Jones has been upgraded to questionable.

Jones Speaks on his Recovery 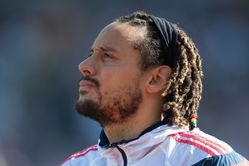 Jones is back at practice, but when does he expect play a game? The player talks about his recovery.

Jones, who rejoined the Revs last Thursday, has been working his way back to full fitness after undergoing successful sports hernia surgery. This development is positive, but Jones is probably still a week or so away from being named to the starting lineup. While Andy Dorman and Daigo Kobyashi have done well filling in, having Jones back should provide the team with an uptick.

For the second straight week, Teal Bunbury is listed as questionable. It's worth noting, however, the the midfielder has been declared fit ahead of Saturday's clash against the Colorado Rapids. It's likely too soon for Bunbury to start but a substitute appearance shouldn't be ruled out.

One name that no longer appears on the list is Kevin Alston, who has been struggling with a right hamstring strain. Alston was listed as out last week but appears to be fully fit now. Alston may have a difficult time regaining his starting spot though as Darrius Barnes has performed well in recent weeks.

For the Rapids, Carlos Alvarez (ankle) and Axel Sjöberg (foot) are out while Drew Moor (knee) is questionable.