In a rare moment, Chris Tierney scored with his right foot. Don't expect it every week though.

At the start, it looked like any other Chris Tierney play. The Massachusetts native received the ball in a wide position, finding himself in an isolated battle with an opposing defender, this time it was John Stertzer. As is often the case, Tierney used some slick footwork to create space. The next piece was a bit more unexpected. With Stertzer completely duped, Tierney lined up a right-footed shot that settled just inside the far post.

You read that right. Tierney scored a right-footed goal. 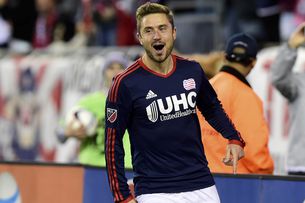 We've got gifs. We've got Vines. W'e've got everything you need to enjoy Tierney's right-footed goal, and we know you will.

The strike was an absolute beauty, but it was also something completely out of the ordinary. When head coach Jay Heaps was asked if Tierney scores a lot of right-footers in practice, he responded with a simple "no." Charlie Davies, who grew up in the area with Tierney, was also a bit taken back.

"I’ve been playing with Chris since I was 12 years old," Davies remarked. "He’s always had an amazing left foot and I can honestly say I’ve never seen him strike a ball with his right foot, at least on goal, so it was special. I was very happy for him, obviously, because we go way back. He better cherish that one for sure."

The stunned responses over the goal aren’t a knock on the New England Revolution defender, whose deadly left foot is well-known in MLS. In fact, it's his overreliance on the left peg that afforded Tierney the room to take the weak-footed shot.

"He has such a great left foot, you have to overplay it," Heaps said. "So for him to pull back, he sensed that he was going to get a little bit of space and he hit that right foot perfectly and that was a great time to do it."

In the 49th minute, ten minutes after his goal, Tierney made another bid on net with his right foot. After working with Juan Agudelo to get the ball past midfield, Tierney played a forward pass to Davies. Although Davies was eventually dispossessed by a Real Salt Lake defender, Tierney was there to collect the rolling ball and put in a shot. This time, Tierney's right-footed strike was pushed aside by goalkeeper Jeff Attinella. The shot, which Heaps jokingly called "greedy," produced a corner, which led to a Davies goal assisted by Scott Caldwell.

With Tierney having so much success with his right foot on Saturday night, will we see more of the same in the future? I wouldn’t expect it.

"Don’t get used to it, that’s probably a one-time thing there," Tierney said with a grin. "It was a good play by Juan to get it out to me, cut it back to the right and gave it go. Closed my eyes and swung the right peg and it went in."