4 Lower Division Defenders the Revolution Should be Scouting

In light of the recent news that Darrius Barnes will miss the next six months, here are four defenders from the USL and NASL that the Revs should keep their eye on.

Share All sharing options for: 4 Lower Division Defenders the Revolution Should be Scouting

We know that Darrius Barnes will miss the next six months after undergoing left knee surgery. We don't know, however, how the team will try to replace him. One option is to look to the lower divisions. With this in mind, here are four USL and NASL players worth scouting: 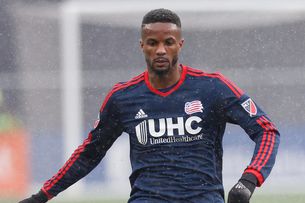 Barnes was very good this year, so how do you replace him? We have some ideas.

1. Bryan Burke: Currently with Louisville City FC, Burke was a staple for Orlando City SC for two seasons before the club made the jump to MLS. The defender, who has a pertinacity to score, has unsuccessfully trialed with Sporting Kansas City and the San Jose Earthquakes in the past. At 26 years old, Burke might be worth a look. He also has his own website.

Doherty's Take: He was great with Orlando in the day. He just missed making the cut up to MLS.

2. Tyler Ruthven: In 2012, Ruthven made five appearances with the New York Red Bulls before embarking on a soccer odyssey that included stops at IK Brage and KuPS. He joined Arizona United SC in 2014 and currently calls the team home. He's a tall defender (6 ft 2 in) that still has the benefit of age (26 years old).

Doherty's Take: Former NYRB utility defender who went abroad and landed in USL with Arizona. He knows Woodberry and is outspoken on the Twitter machine.

3. Gale Agbossoumonde: I'm not sure that a defender has held on to the title of Next Big Thing for longer than  Agbossoumonde. Despite only being 23 years old, Agbossoumonde has been around the world, most recently spending time with Toronto FC and the Colorado Rapids. Currently with the Tampa Bay Rowdies, people are still wondering if Agbossoumonde can live up to the hype.

Doherty's Take: Anybody from Tampa Bay Rowdies would be a cool story. Rich Balchan or Agbossoumonde may be ready to come back to MLS as a reserve option.

4. Marco Franco: Franco was drafted by the Chicago Fire in 2014, but spent the bulk of the season on loan with the Orange County Blues and Indy Eleven. Since then, he has signed a contract to become a full-time Indy Eleven player. Selected 13th overall in the 2014 MLS SuperDraft, it's clear that the former UC Irvine player has loads of potential. Could he fulfill it in New England?