How to Watch: Revolution vs Real Salt Lake

The New England Revolution will be looking to defeat Real Salt Lake for the first time since 2009 when the depleted visitors come to Gillette Stadium on Saturday night.

Share All sharing options for: How to Watch: Revolution vs Real Salt Lake

The New England Revolution haven't had much luck against Real Salt Lake--in fact they haven't beaten them since Aug. 23, 2009--but that could change this Saturday when a depleted RSL visits Gillette Stadium. 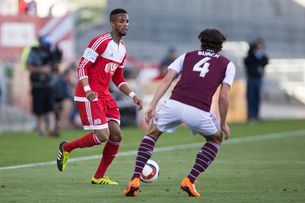 While the Revs will certainly miss Darrius Barnes, RSL has several big names on the most recent injury report.

The Revolution enter the game on a five-game unbeaten stretch, most recently defeating the Philadelphia Union 2-1. Perhaps the most impressive aspect of this good spurt is that the Revs haven't conceded a goal from the run of play since the second game of the season. Staunch defense will only get you so far, however, as the team will be looking to inspire the best from attackers like Juan Agudelo, Lee Nguyen, and Charlie Davies.

It's possible that the goals could flow on Saturday as RSL will be missing several key components, including center backs Chris Schuler and Jamison Olave. Even with a long list of absentees, the Revs won't want to overlook the Claret and Cobalt. Devon Sandoval, who has scored against the Revs in the past, is a feisty forward and Javier Morales, if he plays, is always dangerous on set pieces.

Join us as we discuss today's game!