5 Ways the Revolution Can Cope With the Loss of Barnes

Darrius Barnes will miss the next six months to recover from left knee surgery. How will the Revs cope?

Share All sharing options for: 5 Ways the Revolution Can Cope With the Loss of Barnes

With the official news stating that Darrius Barnes will miss the next six months to recover from left knee surgery, the New England Revolution will likely be looking for defensive depth. How will the Revs cope without their Jack of all trades? Let’s take a look at some of the team’s options. 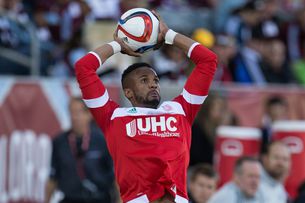 1. Stand Pat, at least for a While

The loss of Barnes, who has made five appearances this season, is big but not devastating. Chris Tierney is the first-choice left back while Kevin Alston, London Woodberry, and Jeremy Hall provide cover. Andrew Farrell and Jose Goncalves are your regular starters in the middle while Jermaine Jones, Woodberry, and Hall are available in a pinch. The right back position is currently vacant but Alston, Woodberry, and Hall have all been serviceable this year.

There aren’t a lot of defenders on the Revolution's roster right now, but those that are listed are capable of starting. As a result, there’s no need for the Revs to hastily add someone. Furthermore, the team doesn't necessarily have be searching for a starter.

2. Trade Within the League

In recent years, the Revs have become increasingly more open to trading within the league. Current players Teal Bunbury (SKC), Brad Knighton (VAN), Daigo Kobayashi (VAN), Sean Okoli (SEA) and Hall (TFC) all arrived in New England from elsewhere in MLS. It’s a smart strategy since the players are already familiarized to the intricacies of the league.

It might be difficult to find a team willing to trade a defender, but it's certainly possible as the Revs certainly don't have a dearth of attackers with high trade value. Names like Christian Dean or Jordan Harvey of the Vancouver Whitecaps stand out. Aaron Maund of Real Salt Lake is an intriguing option as is Noberto Paparatto of the Portland Timbers.

Even before the Barnes news, it seemed as though the Revolution were interested in adding a defender as they recently trialied Brazilian center back Renato Silva. There hasn’t been much news since the initial announcement, so how he performed is a mystery. That said, the incident shows that the Revs are happy to welcome trialists.

The international market is always a mixed bag as players often have trouble adjusting to the travel and physicality of MLS. In 2012, the Revolution welcomed Colombian John Lozano, only to watch him flame out after two appearances. Previous seasons brought short-lived players like Argentine Franco Coria, Ghanian Emmanuel Osei, and Frenchman Didier Domi. To their credit, the Revs have been better on the international market (see Goncalves), so it might be worth scouring the globe.Even someone like former New York Red Bulls defender Richard Eckersley, who is currently trialing in Spain, might be worth a look.

4. Look to the Lower Divisions

The recent success of Woodberry proves that there’s talent in the lower leagues. With the Revs needing defensive depth, especially as the US Open Cup looms, it might be worth looking within NASL and USL.

With 11 teams in NASL and 24 teams in USL, there are plenty of options to considering, including former Revolution players Rob Valentino (now with Arizona United SC) and Bilal Duckett (now with the Charlotte Independence). While some players are in the lower divisions because they can’t hack it in MLS, others are just waiting for the right opportunity to shine.

5. Take in a loanee from Sporting CP

Last October, the Revs entered into a partnership with Portuguese side Sporting CP. The arrangement allows the two teams to share resources as they focus on improving training and development methods. It also includes the possibility of the Revs taking in a Sporting player on loan.

During the offseason, it was rumored that midfielder Heldon Ramos could be heading stateside. The deal never materialized, however, as the Cape Verdean international ultimately went on loan to La Liga’s Cordoba. With the Revs now in the market for a center back, it might be time to see if their sister club has any options.