Fox Soccer writer Laura Vecsey argued for including Abby Wambach in the World Cup roster based on her legacy. This is the wrong approach for women's soccer coverage.

Share All sharing options for: How Fox Soccer Got Abby Wambach's Story Wrong

The US women's national team seems like a perfect microcosm of the American dream: through hard work and perseverance, you can be anything you want to be.  It's a meritocracy, where everyone auditions for their job at every practice, and anyone can be displaced by a brighter, more ferocious talent. On its face, no one is untouchable.

That notion is simply untrue. Yet every four years media outlets who normally give about 2% of their soccer coverage to the women's game suddenly give about 5% instead, and all to the refrain of: "American Exceptionalism! Clap clap clap-clap-clap."

This approach is galling when fans can see with their own eyes that the USWNT is not a meritocracy, at least not in the strictest sense. Internal politics play their own role, whether it's veterans choosing and dismissing coaches at will or US Soccer pushing big names over youth development, perhaps in a bid to attract dollars, perhaps because they have no faith in their own youth system to produce World-Cup level talent and need a locked-down proven roster for 2015. 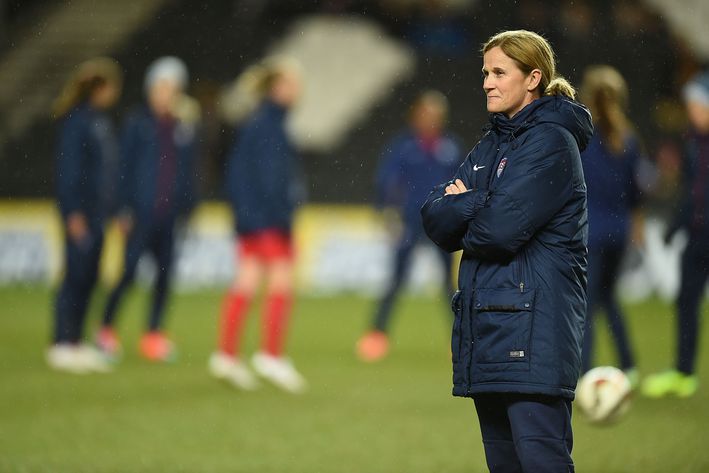 The USWNT World Cup roster was set months ago, and that isn't a good thing.

The latest in a long line of articles helping to pad the résumés of those who, quite frankly, don't need it, is one from Fox Soccer by Laura Vecsey entitled "Abby Wambach earned her spot as a TIME 100 Icon." The article goes into Wambach's long history of being a goalscorer for the United States, which in and of itself is fine. There's nothing wrong with recognizing Wambach's past accomplishments and her contribution to the sport. The error lies in thinking that past performance justifies present reward.

The article is structured thus:

1) It is clear Abby Wambach is less effective than she used to be, with quotes from Anson Dorrance and Pia Sundhage to that effect, both sources who could generally be trusted to evaluate Wambach with a degree of accuracy.

2) The United States seems to be trying to move away from direct play to a more possession-oriented system, but still finds direct play beneficial. Abby Wambach is emblematic of the direct style and most useful in that system, producing goals like the one in the 2011 Brazil quarterfinal.

3) Wambach's scoring success is partially why US Soccer has made a financial commitment to the women's game, leading to the existence of NWSL.

The article took one step too many in that logic chain, mainly the one where Wambach's symbolic presence should lead to a World Cup roster spot. Indeed, even an Olympic roster spot as well, which Vecsey claims Wambach has already earned. The direct-vs-possession argument is one the team and its fans have been having for a long time, and is a legitimate discussion point in deciding whether to bring along someone like Wambach. (There is no reason the two styles can't both be useful at the same time depending on formation and opponent, but that is beyond the scope of this article.)

What is not a legitimate reason for including or excluding Abby Wambach from a World Cup roster is what she did four years ago. The only thing that matters, that should matter, is her performance now. The article itself acknowledges her performance has dropped off and in nearly the same breath says that none of that matters.

An analysis by Equalizer Soccer of Wambach's goals over the past three years shows conclusively that her scoring against top nations is not what it used to be. Analysis at Soccer Wire looked at her scoring in 2014 against top 20 teams with and without her, showing the USWNT scored more when Wambach was not on the field. That is a legitimate reason for exclusion. If Wambach has been exceptional in practice and Ellis believes that she can put together the final product on the field in Canada, that is a reason for her to go. You could even argue that Wambach's symbolic value and presence as a mentor to the players themselves is so important and so overarching that to not have her present would be such a mental detriment as to impact performance. That is not the argument that is being made.

The dismissal of Wambach's "limited mobility" and being "less comprehensively effective" is based on her career accomplishments, not her current performance. In a system based entirely on performance, the system that US Soccer would have you believe exists and produces the finest team in the world, accolades and goals from four years ago should have no relevance to the now.

The lionization of a player is nice when deserved, aggravating when not. Is the women's game still at a point where discussion in big media outlets has to play up the rah-rah aspects of the team and handle criticism with fine museum-quality gloves? And this at a time when a fair amount of criticism has been leveled at Wambach, taking issue with an apparent double standard approved and perpetuated by US Soccer. The article cavalierly suggests that Wambach's position was solid as long ago as 2011, immediately after the last World Cup, then doubles down with another roster spot for the 2016 Olympics based on nothing of substance.

Abby Wambach is certainly an icon of American soccer. There is no doubt that she has repeatedly put her body on the line for this program and has helped drive the success of the USWNT. But American athletic exceptionalism is partially predicated on the notion that there can't be favorites; the chaff must be winnowed. Has Wambach earned the right to a roster spot? She's certainly earned the right to try. But the media cannot fall into the trap of ignoring everything but the hype. Women's soccer deserves better than that.

Women's soccer deserves full-blown analysis and criticism, the kind of in-depth wonkery that drives people to memorize lifetime stats and lie in bed with an acid-churned gut over what formation will start in the morning. Women's soccer deserves clear-eyed accuracy in reporting, not the same easily digestible story presented over and over with the parts vaguely rearranged. Women's soccer deserves respect, and sometimes that means the grim business of admitting when the sun is setting on a storied career. Argue for or against Abby Wambach's roster spot, but do it on the merits of her abilities, not on her legacy. She's an icon; she can take it.