The USMNT won't play another CONCACAF opponent before the Gold Cup, and Jurgen Klinsmann has called in a solid domestic based squad to face Mexico at the Alamodome.

The United States will have another opportunity to get a good look at more European based players during a two-game trip in June against Germany and Netherlands.

But in this one-off game against Mexico, it might be the last chance for several MLS players to impress head coach Jurgen Klinsmann before the Gold Cup roster is announced in July.

There are MLS regulars like Michael Bradley, Omar Gonzalez and Matt Besler that are in camp, and others like Clint Dempsey (injury) and Jozy Altidore (suspension) will likely make the Gold Cup roster in the summer. But that opens the door for others like Lee Nguyen, Juan Agudelo, Gyasi Zardes and Perry Kitchen to make an impression in what might be their last chance with the national team before the Gold Cup.

But it's not just MLS players who are getting another chance to impress, Joe Corona is back with the USMNT for the first time in a while along with a few other LigaMX base players like young defenders Greg Garza and Ventura Alvarado and dual national keeper William Yarbrough. 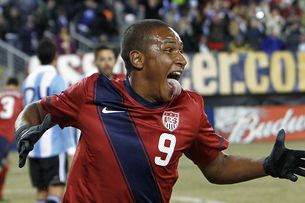 After nearly a year away from the national team and a soccer club in general, Juan Agudelo has quickly found his way back to the USMNT.

But for the most part, this will be a chance to get a few of these players at least involved with the national team camp, even if it's only for a couple of days and/or training sessions and a lone friendly. And while there's a good amount of veterans on this team, and I expect many of them to start, there's a staggering amount of young players trying to break through into the national team roster.

If we go by position, barring injuries of course, Yarbrough could directly be competing with Hamid for the third goalkeeper spot for the Gold Cup. With Tim Howard taking the year off and Brad Guzan and Rimando the established 1-2 on the depth chart, it's going to take a lot for Yarbrough to overtake the usually in-form Hamid.

On the defense, Alvarado has been at the center of a few, now traditional, late-game collapses of the US backline. The young defender has usually seen action in the final ten minutes, which isn't enough time for him to acclimate to the game before the US has resorted to bunkering and trying, and failing, to stave of late-minute attacks from opponents. Personally, I like versatility and depth on my bench, so if Alvarado is going to make the Gold Cup roster, he's going to have to beat out someone like Brad Evans, a veteran who can play multiple positions along the back line.

In the midfield, I'm going to peg Joe Corona for a start in this game and I think he has the biggest chance to make an impression here. He scored twice in the 2013 Gold Cup and he has the versatility and skill set to man multiple midfield positions but ideally he'll be starting out wide. Perry Kitchen, a late replacement for Michael Orozco, has the biggest chance of the central midfielders, especially if he can eventually replace a steady presence like Kyle Beckerman on the roster as a true holding midfielder. Lee Nguyen will probably have a roster spot for the Gold Cup, but if he gets a chance to get legitimate minutes in a central, playmaking (#10) role, he could be competing with someone like Alejandro Bedoya for a starting role or serious minutes of the bench.

Up top, someone has to eventually replace Chris Wondolowski in this player pool. Behind Jozy Altidore and Aron Johansson, there's not a ton of depth for true out and out strikers. There's a long of hybrid attacking wingers like Agudelo and Gyasi Zardes who can play both wide and up top, but probably aren't specifically suited for being a target forward.

Okay, so we can go semantics on whether or not this is a 4-2-3-1 with both Beckerman and Bradley as holding midfielders, but we're not going to see anything that resembles a true 4-3-3. If you want to give me some wierd diamond formation with Bradley as the CAM and Corona and Mix on the flanks with Agudelo and Wondo up top, I'm okay with that too.

This is essentially what the US is the best at, clog the middle, create turnovers and counter. Having Agudelo out wide as a two way player is something he's done with New England recently so he gets the start over someone like Green or Ibarra. But would I mind seeing both of them along with say Jordan Morris late in the game as the three attackers/wingers in a 4-3-3 setup? No, absolutely not, I think it could work for a variety of reasons tactically but most importantly it's three young players with fresh legs attacking a tired defense.

You'll probably have the usual suspects off the bench, Nguyen for Mix, Garza for Shea and Evans for Yedlin. I'd actually like to see the Gonzalez-Besler pairing get a full 90 minutes but I understand there are club considerations as well and Klinsmann has to balance minutes. But I'd like to test out the "Alvarado Theory" and see if those late games subs to the backline have anything to do with these late game collapses, at least for the centerbacks anyway. Garza and Evans are more defensive minded players.

This is by far a fringe roster for El Tri, as Miguel Herrera has called in a very inexperienced squad for this friendly as far as international experience goes. Only defender Francisco Rodriquez of Cruz Azul has any significant experience with 98 caps as he headlines a squad with only four players with double digit appearances internationally. Of note for Mexico's attack however is Houston Dynamo loanee Erik "Cubo" Torres currently playing with Guadalajara.

Mexico has a busy summer ahead of them, as they'll also be playing in the 2015 CONEMBOL Copa America as a guest. That means balancing not only the players used for both of the two tournaments but also determining two different rosters to compete in both tournaments. Herrara could be using this game to figure out which senior eligible players he wants to attach to the Copa America roster because usually you have to play your Olympic/U23 team when playing as a guest nation in another tournament. Though that wont be the case for the 2016 Copa America in the US next summer, which will feature full squads, I assume that Mexico isn't sending it's full senior team to South America though that's because they have to prioritize the Gold Cup.

The United States-Mexico game can be seen on FoxSports1 tonight at 8:30PM.