Scott Caldwell talks about what it means to be endorsed by Jermaine Jones.

Days before Jurgen Klinsmann named his 22-man roster to face Mexico in a friendly, Jermaine Jones made a plug for New England Revolution teammate Scott Caldwell, saying that he hopes the Massachusetts native will replace him on the US Men’s National Team. While Caldwell will have to wait for his call up, it’s not hard to see why he could one day represent the Stars and Stripes. 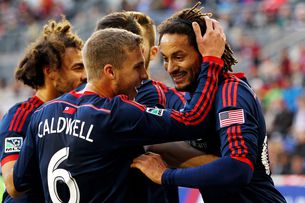 Playing in his sixth game this season (fifth start), Caldwell was steady as always against Columbus Crew SC. His 90-minute performance included a team-best 67 touches and a pass completion rate of 80.8%, according to WhoScored.com. Defensively, he protected the backline, finishing with two interceptions and two clearances. It’s this type of steady performance that observers have come to expect from Caldwell.

Perhaps the most impressive aspect of Caldwell’s work was that he appeared unfazed when Jones made way for Andy Dorman at halftime. Switching partners is something that Caldwell has become accustomed to as he’s played alongside Jones, Dorman, and Daigo Koyabashi this year.

"It’s pretty seamless with our team," Caldwell explained. "Just the way we train together, everyone is on the same page. We’re all good players. As long as we’re communicating and as long as we know what to expect, it’s going to be good."

The consistency showed by Caldwell could lead to a US National Team call up. The midfielder, who has been compared to Kyle Beckerman, has experience representing his country at the youth levels. The endorsement of Jones is another benefit that could help pave the way for a cap with the senior team.

Not getting ahead of himself, Caldwell is just happy to be praised by a revered teammate.

"It’s always good to be complimented by your peers," Caldwell said of the Jones comment. "It’s something to get respect, so it’s a good feeling."

While Caldwell won’t be in Texas for the US-Mexico game, it’s perfectly fine since his focus is on playing for his hometown team. Currently sitting in fourth place in the Eastern Conference, the Revs have rebounded from a slow start and are now on an unbeaten run of four straight.

Despite these stats and putting in fine individual performances, Caldwell is fixated on getting better.

"There’s still a lot of work to be done," Caldwell noted. "The first priority is getting three points. Today we weren’t able to do that, so we have to improve each and every game to get the three points."