The New England Revolution are on the verge of full health as Jermaine Jones nears full fitness and Chris Tierney eyes a return against the Philadelphia Union.

On a night where Jermaine Jones and Teal Bunbury returned to the starting lineup, Chris Tierney was noticeably absent. Tierney, who had played every minute before Saturday’s game, was sidelined with an ankle injury. The club is hopeful that the Massachusetts native will be back on the field soon as the New England Revolution inch towards full health. 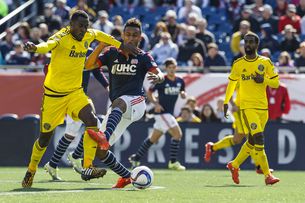 There weren't any goals in this weekend's clash, but there were talking points.

"He took a pretty good knock in the Colorado game," head coach Jay Heaps explained. "So this week we tried to move him along a little bit but realized he was going to be out for the game."

With Tierney unavailable, Heaps deployed Kevin Alston at left back. The versatile defender, who actually was the team’s starting right back for the season opener, performed well, though the attacking prowess of Tierney, who should be available next weekend, was certainly missed.

The other major injury development for the Revs came in the form of Jones making his 2015 season debut. The Designated Player contributed 45 minutes before making way at halftime. It was a predetermined amount of time that should led to more minutes next weekend against the Philadelphia Union.

"Of course I want to play more but the coach and me talk before the game," Jones said. "We weren’t sure if I start or if I come in. It was good. I feel good in the first half. Now I hope that I can go 90 minutes against Philadelphia."

Even though his time on the field was brief, Jones’ teammates were happy to see him back.

"It was great," Lee Nguyen commented. "Obviously, we all wish he could have gone longer, but I think he's getting his fitness back. But you can see what he can do in there with us. I think next week you'll see more."