After a period of turbulence, Juan Agudelo is now settled and ready for his US Men's National Team call up.

Share All sharing options for: Revolution's Agudelo Ready for USMNT Call Up

Since leaving the New England Revolution after the 2013 season, Juan Agudelo’s life has been turbulent. The striker hoped to join Stoke City of the EPL, but landed with Dutch club FC Utrecht after being denied a work permit. Later rebuffed for a second time, Agudelo went without a club for eight months before ultimately rejoining the Revolution. Now settled, the 22-year-old is in a good place as he departs for US National Team camp. 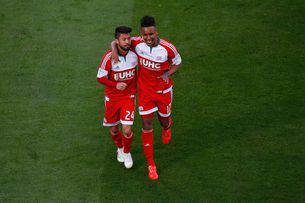 The Revolution will have two representatives when the USMNT faces Mexico on Wednesday.

When talking about his move back to New England, a place where he had seven goals and one assist in 14 regular season appearances, Agudelo cited a great locker room atmosphere as well as a desire to create stability for his blossoming family. Though hopeful that he would one day don the colors of his country again, Agudelo didn’t name it as a motivating factor, telling MLSSoccer.com, "I’m focusing on my club efforts."

Six games into the MLS season, the approach has apparently worked.

"I just tried to do what I can with the Revolution these first couple of games," Agudelo reflected. "I feel like I’m getting a lot more comfortable every game that I play with the squad. I’m just really happy that I got the call, whether it was now or later."

Agudelo received the news in a "very nice email" which stirred a lot of emotions. The player is now looking to earn his first cap since Mar. 5, 2014 when the United States faces Mexico on Wednesday.

Before then, however, the team will have a couple days to practice. While he’s obviously no stranger to the US National Team—he scored against South Africa as a 17-year-old making his international debut—Agudelo has still sought out advice from Jermaine Jones and Lee Nguyen, who have been regulars in recent camps.

While his stay in Europe was unpredictable at times, Agudelo learned a lot from the experience. Exposure to a different playing style as well as the general European approach is something that he thinks will aid him as he heads into Jurgen Klinsmann’s camp.

"It’s a system where you have to understand where to play your role and your position," Agudelo said of Klinsmann’s setup. "You have to be understanding of your teammates and when they press."

The air of uncertainty that followed Agudelo after leaving MLS is now gone as the player has found a home in New England. A regular starter for the club, Agudelo recently scored a beauty against the Colorado Rapids. Off the field, Agudelo has welcomed a daughter into the world.

With everything in Agudelo’s life now settled, it’s all about what's to come.

"Everything feels like it used to be," he said. "Now I’m just happy to get the ball rolling down the hill."