No goals, plenty of wind, and three thoughts.

While there were no goals in Saturday afternoon's meeting between the New England Revolution and Columbus Crew SC, that doesn't mean we didn't learn anything. Here are three takeaway from the scoreless draw: 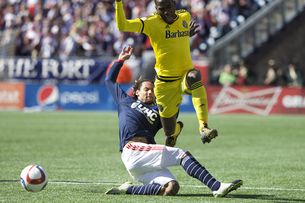 1.) Jermaine Jones is single-handedly making Crew SC a rival. As it is, the Revs have too many "rivals." The Chicago Fire and Houston Dynamo earn the distinction because of playoff history. Meanwhile, the New York Red Bulls and New York City FC make sense geographically. Crew SC are the latest team to be considered an adversary. Though primarily based on last year's Eastern Conference Semifinal, this rivalry does have potential, largely because of Jones. The Designated Player earned a yellow card in the 12th minute of Saturday’s game for a tackle on Tony Tchani. He later reflected on the moment by saying, "That happens when you talk too much." While Jones would later compliment Tchani and Crew SC, moments and comments like those help build a rivalry.

2.) Crew SC were smart in their organization. Heading into Saturday’s game, Crew SC had completed 79.1% of their passes, good for second best in the league. This trend continued this weekend as the visitors led the Revs in every passing category, including crosses (29% vs 19%), passes made in the final third (68% vs 62%), and overall (78% vs 73%). Even against the Revolution’s high press, the Crew stayed disciplined in their shape, relying on quick, triangular passes to create space. The methodology of the Crew, who played two games in one week, is a sign of good coaching.

3.) Teal Bunbury deserves to be on the field. The Revolution’s starting lineup raised eyebrows as Bunbury returned to the right flank, which shifted Juan Agudelo to the loan striker spot. The moves left Charlie Davies on the bench. Though Davies, who was probably the team’s playoff MVP last season, is deserving of a starting position, Bunbury shouldn’t be sacrificed. The former Sporting KC man tried to make things happen offensively yesterday as seen in the 25th minute when he took down a Jones pass and nearly got in on goal. While these attacking moments are important, it’s worth noting how good Bunbury is defensively. The converted striker is tenacious and never gives up on the ball. This mindset will keep him on the field for many games to come.