Looking ahead at 2015, TBM tries to predict who will be the New England Revolution's Most Valuable Player.

Share All sharing options for: Who Will Be the Revolution's 2015 MVP?

There's a lot of talent on the New England Revolution this year, so much so there will be bench players that could easily start on other MLS teams. And while the Revs run on a team-first mentality, there will be an MVP named at the end of the season. Here are TBM's predictions of who will reign supreme in 2015. 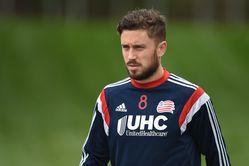 Goncalves? Tierney? Shuttleworth? Who will be the best defender in 2015?!

Sure, the Revolution's 2014 turnaround began before the arrival of Jones but there's no question that the US international was a critical part of the team's march to MLS Cup. After his late summer arrival, Jones offered two goals and four assists in ten appearances. More impressive, however, was the 11-2-2 record that the Revs amassed across all competitions when Jones saw the field. With a full season with the Revs ahead of him, the midfielder's value will be on full display.

In 2013, it was the Revolution's defense that led them back to the playoffs. Last season, it was the midfield that dominated late in the year as the Revs returned to MLS Cup. So, this year it seems the final piece will probably be the striker that made such an impact for the Revs in 2013. While Patrick Mullins and Charlie Davies were adequate and at times stellar during the 2014 season, it was overshadowed by the teams strength in the center of the midfield. Agudelo is a complete striker up top, who can not only play with his back to goal but also create his own shots, and this is good considering that the Revs don't take a lot of shots and are often too patient in the final third looking for perfect chances. Agudelo should be able to create a handful of half-chances for himself and more often than not, they'll turn into goals either for himself or someone else on the team.

Over the past five seasons, Shuttleworth has experienced a quiet rise through the ranks of Revolution stardom. The stalwart keeper matured under Matt Reis, battled for a starting spot with Brad Knighton and solidified himself as the team's number one option, all while helping the Revs earn a spot in the 2014 MLS Cup Final. As Andrew Farrell and Jose Goncalves work to develop chemistry in March and April, Bobby will need to show continued growth as a leader, communicator and shot stopper. He's proven he can mature; now, he's ready to break into the elite at the position, using his fiery nature and raw talent to serve as the most valuable player on Jay Heaps roster.

There are easy choices out there for this award - Jermaine Jones, Lee Nguyen, even Juan Agudelo or Jose Goncalves - but the big one this season is going to be Diego. In 2013, he lead the team in goals and set up nearly as many as he scored, but in 2014, after a hot streak in May-June, he fell off the pace and out of the starting lineup. Ask yourself, what was the difference a year made? The difference was Juan Agudelo, and this year, Agudelo is back. His influence and chemistry with Fagundez cannot be understated, and this preseason it has already provided Diego with a boost. Add that to Diego's emergence with the Uruguay U-20s and the experience of serious adversity and competition from a stacked attacking corps, and I think you'll see Fagundez finally blossom into the consistent, dynamic, and terrifying player he truly can be.