You'll probably watch them all, but these are four games you GOTTA watch in 2015.

With news that the 2015 MLS season will in fact kickoff as scheduled, it's time to look forward at what's ahead. The New England Revolution have some tantalizing fixtures lined up as they look to win the elusive MLS Cup. Here are four matches that you won't want to miss.

Though I cannot wait to visit Yankee Stadium, square off with David Villa and jumpstart what promises to become a heated rivalry, I'm more excited to take on Seattle. In one matchup last season, Diego Fagundez & Co. dropped a five-spot on the Sounders, winning the home match in convincing fashion. But this year, we'll be forced to prove ourselves on the road, visiting a Seattle side that will undoubtedly play much tougher than it did last May. If the Revs want to return to MLS Cup in 2015, they'll have to hang with teams like Seattle, LA and RSL. The journey begins in March; I'm looking forward to a quick start.

CBA Agreed Upon, Season to Start on Time 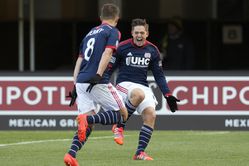 The drama is over as a new CBA is in place and the 2015 MLS season will start on time.

Mar. 15 marks the first-ever MLS game at Yankee Stadium, which is probably an hour closer to me than Gillette or Boston. But aside from that, with Houston and SKC moving to the Western Conference, the Revs are losing games against two teams that we'd call rivals. As a result, we have to channel our anger elsewhere. And then there's the whole I have to defend the New England honor of Fairfield County, Connecticut because no one else will. Also, a chance to make fun of a NY Yankee/Man City owned soccer team that can't even sign players properly? A chance to take the first train directly to a stadium for a Revolution game? I can't miss this.

It may be the low-hanging fruit, but the game to see this season is going to be the rematch of last season's MLS Cup Final. during that match, the Revs were largely outclassed by a seemingly-superior opponent. Despite that, they ended up just a shaving of the post away from winning it all in regulation, and fell prey to an extra-time strike while fatigued and falling apart to lose the title. Half the squad came up lame at some point in that game, and Lee Nguyen even had to leave with his injury. Both teams have some new looks and faces coming into 2015, with some key departures (Soares, Donovan), and some key acquisitions (Agudelo, Gerrard). Of course, Gerrard won't be joining LA until July, so the Revs will contend with the Galaxy without him, and they'll have a chip on their shoulder. Andrew Farrell in particular will feel he has something to prove, and I expect him and the rest of the squad to put on a show, win or lose. This is going to be the game this year, and the only sad part is that they won't see each other again until the postseason, if at all.

Home games are great, but away games can be just as fun. The Revolution introduced a unique ticket package this year where fans could purchase Fort seats that included a game ticket and round-trip bus transportation to Red Bull Arena. The package was limited to 750 fans, though more are likely to make the trip to New Jersey. Adding to the excitement revolved around this match is the fact that the US Men's National Team will play at Gillette Stadium the day before. This is a soccer weekend that fans should circle on their calendar.