Darrius Barnes' return to the center back position helped the New England Revolution record their first shutout of 2015.

Share All sharing options for: Versatile Barnes Helps Revs to First Shutout of 2015

With Jose Goncalves suspended and Kevin Alston injured, head coach Jay Heaps was forced to do some defensive shuffling. It’s a problem that would cause headaches for most coaches but not Heaps, who has the versatile Darrius Barnes at his disposal.

"Darrius is the kind of player that helps a coach sleep at night because you can put him anywhere," Heaps praised. "You know he’s going to be up for the game and he brings it every day in training and he brought it today in the game. 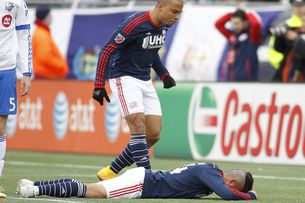 Still no goals for the Revolution but they do have a shutout after Saturday's scoreless draw.

Barnes was one of two defenders to make his first start of the season on Saturday against the Montreal Impact. While Barnes featured in the center alongside Andrew Farrell, Jeremy Hall manned the right back position. While neither player is a regular starter, their performances on Saturday received high praise from their teammates.

"We have the capable guys: Darrius, Jeremy, (and) guys like London (Woodberry) on our bench," Farrell noted. "I think Jeremy and Darrius kept us in it."

Playing Barnes at center back was a move that harkened back to the 2009 season when the Duke product played every minute of every game as a rookie. In subsequent seasons, Barnes would showcase his adaptability as he played every position along the back line. He became a huge asset to the Revs, gaining a reputation as a player who could plug any hole.

On Saturday, Barnes made his first regular season start at center back since 2012. Although plenty of time has passed since that day, Barnes felt at home in the center.

"I love being in the middle and being the aggressor a little bit," Barnes explained. "I felt very comfortable being there."

Heaps echoed Barnes’ sentiments after the game, saying that he was "really happy" with how the seventh-year pro played against the Impact. A likely starter for most teams in MLS, having Barnes as a reserve is a luxury for the New England Revolution.

With Goncalves returning from suspension next week, Heaps will have more defensive options when writing his starting eleven. If the captain does return to the middle, Barnes and Hall will likely battle over the right back spot. Even if Barnes isn’t named as a starter next week, his time will come again. And, like he always is, Barnes will be ready.

"There’s a lot of minutes out there for Darrius, and whenever he gets them, he does well," Heaps lauded.