8 days before the team kicks off its 2015 campaign in Red Bull Arena, Rochester came out of the gates firing against Syracuse University.

Share All sharing options for: Rhinos Trample Syracuse 4-0 in Last Preseason Game of 2015

Blustery snow and thick rain made way for weak sunlight as Syracuse University and the Rochester Rhinos warmed up at Sahlen's Stadium. Large snowbanks surrounded the well-worn turf field when Bob Lilley's men lined up in their final preparation match ahead of the 2015 USL season.

The hosts wasted no time to make an impact in the game despite the cold weather in Rochester. Colin Rolfe took a smart finish just 2 minutes into the game after his defensive teammates won the ball from Syracuse's attack. The second-year Rhino was played through the defense on the ground and he hit his far post shot brilliantly to the inside netting.

About five minutes after Rolfe opened the scoring, the Rhinos won their first corner kick. Mendoza sent the ball inswinging to the center with his right foot and recent addition Julian Ringhof was on hand to smash his header home from close range. 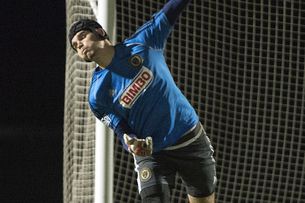 Brendan Doherty talks with Rhinos President Pat Ercoli about player development and why the Rhinos are thrilled to see former keeper McCarthy sign with the Phildelphia Union in MLS.

It wasn't all smiles for Rochester, however, as coach Lilley repeatedly barked orders at his players regarding their positioning and decision-making. Totsch, who signed with the team a few weeks ago, appeared out of sorts playing left back instead of his more natural center back position.

To make matters worse, both Mendoza and returning attack Alex Dixon played rather narrowly in the two winger roles. This meant that most of Rochester's players were congested in the middle of the field and Syracuse was able to exploit wide areas with speedy forward and midfield players.

Late in the first half, Tony Walls made his presence known. The team's Defensive Player and Newcomer of the Year in 2014 only joined the Rhinos this past week after his MASL season with the Milwaukee Wave concluded. Mendoza again provided the service and Walls capitalized on ....

To start the second half, Bob Lilley only made 6 changes but followed that with 4 more substitutions before the hour mark.

Another Mendoza corner in the first ten minutes of the half bounced through the penalty area to Duba at the far post. The powerful Cabo Verdean forward made no mistake with a blistering side volley finish from about a yard out.

After the goal, Lilley swapped Sean Murdoch for Miller, Marcos Ugarte for Mendoza, and Nikola Paunic and Vassilis Apostolopoulos for van de Casteele and Ringhof. Ringhof was one of the strongest performers during his roughly 60 minutes on the field even though he had only been training with the team for a few days.

Defensively minded central midfielder Christian Silva had a solid performance and showed glimpses of a classic regista, spreading passes around the field from a deep-lying position. Fellow substitute, and fellow Christian, Volesky played well as the advanced forward but slipped on his best chance of the half, played through with an angle to shoot right-footed near the top of the 18-yard-box.

Ugarte was dangerous going forward in the second half but the focal point of the attack was Duba as the target man. Before twisting his knee on the wet turf surface, left back Webb was very impressive supporting the attack and even unleashed a nasty shot from distance that troubled the Syracuse goalkeeper.

A slight worry for Lilley and his staff, Duba appeared to pick up a hamstring injury in the last 10 minutes of the game. Able to walk off on his own, the big man immediately began treating his upper leg on the sideline.

Head Coach Bob Lilley was animated during the first half despite taking the early lead, after the game he explained, "I just think we didn't have enough possession. Our goals in the first half were off two restarts, which is good, and I was happy with the finishes, but for me our possession will have to be much better and we need to create more off of our play."

"I don't think scoring a couple early goals is an excuse not to try to be better, to play at a higher level. My concern is that we got sloppy, we kind of took our foot off the pedal. The quality needs to be there if we're going to win consistently in our league."

Lilley said Webb should be fine going forward, but just a bit sore in his left knee. "And Duba had a bit of a hamstring. Hopefully it's not a 2 to 3 week-er, hopefully in 3 to 4 days he's back training but we'll have to see how that goes."

Lilley is looking forward to early next week when he's able to add the final touches to his roster to start the 2015 season. Onua Obasi and a new incoming signing are expected to join Rochester after the weekend's MASL championship with the Baltimore Blast. "Hopefully we'll have them in by Tuesday, at the latest Wednesday."

With regard to the Revolution's loanees, "We heard that they would be coming in on Tuesday. If they get here Tuesday, then we'll be able to train Wednesday and Thursday and make them available for the game on the weekend."

"We're still in the process of getting a number of these new guys registered. We've agreed to terms but until they're cleared and have the ITC, it's not done. It was a busy week for us and certainly this coming week will be very busy in terms of finalizing our rosters and getting players eligible for the first game."

The Rhinos open their 2015 USL campaign next Saturday on March 28th on the road at New York Red Bulls II. That game and all USL games will be available live and archived on YouTube.