Who Will Score the Revolution's First Goal of 2015?

Share All sharing options for: Who Will Score the Revolution's First Goal of 2015?

Despite promising looks from Kelyn Rowe and Juan Agudelo, the New England Revolution are scoreless in 2015. After tough road games against the Seattle Sounders and New York City FC, a little home cooking might be what's needed in order to jump start the attack. Whether the first goal of 2015 comes this Saturday against the Montreal Impact or later, we at TBM are taking bets on who tickles the twine first (h/t Brad Feldman).

Who Starts on the Back Line this Saturday? 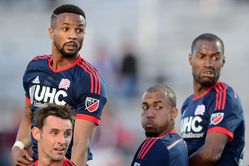 Jose Goncalves is suspended. Kevin Alston is injured. So who starts defensively this Saturday? We breakdown the options.

When you're going through a cold spell, a breakthrough can come from the most unlikely source and that's why I foresee Barnes scoring the first Revolution goal of 2015. I can see it all now. Chris Tierney, who provided sensational service against New York City FC, will whip in a corner kick this weekend that will find the head of Barnes, who has of course risen above everyone else. Barnes will celebrate enthusiastically (possibly by kissing the crest) while "The Boys are Back" (or whatever song is picked) blasts throughout Gillette Stadium. It will be quite a sight.

Barnes isn't the obvious choice to score the first goal of 2015, but who honestly thought Jerry Bengtson and an own goal would help the team get off the schneid in 2013 and 2014, respectively?

We've had ample time to gripe about Agudelo's early-season performance, though we all knew it would take a few weeks for the Revs' no. 9 to find his form. In fitting fashion, Agudelo will silence his critics and find the back of the net before his teammates. By doing so, the former NYRB prodigy will break out of a short-lived funk--and break onto the MLS scene for the second time.

Like Seth, I envision the Revs' first goal arriving on the end a Chris Tierney cross. On the counter, off a perfectly-placed diagonal ball from Lee Nguyen, Tierney will hit a one-time ball into the penalty area. A late run by Agudelo, followed by a simple nodding header, will give the Revs their first tally of 2015.

MVLee will pick up his 2015 campaign right where his MLS Best XI season from last year finished. I can picture it now. Lee collects a ball behind the striker, dribbles into the space the defense provides him, before he freezes the goalkeeper and calmly slots into the side netting. It will sent The Fort into pure delight and the panic from this year's early start will quickly vanish from the memory of Revs fans. Nguyen is pure class and the Revs' first goal of the year will be classic Nguyen.

The Revs offense isn't clicking right now, which makes it all the more likely that someone is going to come off the bench with an opportunity to not only score, but hit a game winner. Enter Revs super-sub Steven Neumann. Despite leading MLS in substitute appearances in 2014 as a rookie, Neumann still hasn't netted his first goal. How does he get his first? Well, it's pretty simple. With the game scoreless, coach Heaps puts in Neumann and has him combine with someone like Rowe or Agudelo up top. This allows Neumann to find himself open from close range for a tap-in goal. Or it could be a long-range effort, like so many other Revs midfielders can do. With the Revs' offense mostly stagnant through two games, a different look late in the game could be the difference and I predict that difference will come in the form of Neumann.