The Rhinos took a bus trip up to Canada to face off against NASL side Ottawa Fury FC in the hardest matchup of the 2015 preseason. Another trialist, Laurent Lanteri, made the breakthrough for Bob Lilley's men before a second half equalizer.

Rochester Rhinos left on Thursday afternoon to make the 275 mile bus trip up north towards Ottawa. The players, many of whom are still hoping to earn a contract from the team, packed their passports and headed off to Canada for Friday morning's preseason game against Ottawa Fury FC of the NASL.

About to kick off their second year, the Fury provided stiff competition for the Rhinos in a match filled with meaty challenges. Former Charleston Battery midfielder Nicki Patterson left the game in the early minutes with a head laceration but was patched up at a local hospital. 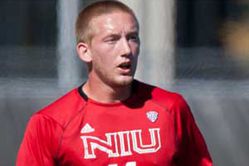 Murdoch is at least the fifth goalkeeper brought into camp by the coaching staff and made a couple saves in the first half. Totsch, fresh off announcing his contract with the team, slotted in at left back against Ottawa. Vassilis started alongside Totsch in the middle against Buffalo and made his presence felt on Friday.

Nikola Paunic is a newcomer in training camp but put in a quality showing with a number of important interventions. Pat McMahon was able to play in his more familiar full back position after playing in the center of defense last weekend.

For another game running, Lilley opted to switch his wingers at various points during the game. Alex Dixon displayed great speed while running the channels but trialist Laurent Lanteri made the difference for the Rhinos in the first half.

Returning midfielder Mike Garzi showed a knack for filling in on both sides of the ball in 2014 and partnered well with Tyler Arnone on Friday. Arnone, a University of Michigan product who played last summer with Detroit City FC of the NPSL, recreated his strong two-way play with a solid performance against Ottawa.

Stavros used his big frame to generate a powerful free kick in the first half that was blocked by Ottawa but pinballed around the penalty area. French winger Lanteri was the quickest to react and poked home his shot to give the visitors a 1-0 lead in the 20th minute.

Volesky played as the dynamic forward next to Stavros who acted as the target man. Just a few minutes after Rochester took the lead, Volesky was played through the Ottawa defense and was one on one with the goalkeeper. Fury FC's keeper Marcel DeBellis left his area and fouled Volesky for a dismissal but the home side was able to replace the goalkeeper in accordance with agreed upon rules for this preseason friendly.

Ottawa's Carl Haworth equalized with 15 minutes left in regulation. After receiving a pass a stride, the Niagara University alumnus shimmied a defender, and struck his shot low to the corner from inside the penalty area.

Uniquely in this preseason, Coach Lilley kept his starting line-up on the field well into the second half. This gave Lilley and his newly announced coaching staff of Georgios Kyriazis and Gavin McInerny an extended opportunity to evaluate those players at a high level against another professional side.

The final game of Rochester's preseason preparations is on Sunday afternoon in Rochester against Cornell University. If weather conditions permit, the game will kick off from Sahlen's Stadium at 3pm.