Bobby Shuttleworth spoke to media on Friday morning at the Dana Farber FieldHouse. He explained that there may be growing pains with the back-four, but things should straighten out as more games are played.

Share All sharing options for: Bobby Shuttleworth Emphasizes Patience with Back Line

The New England Revolution are finishing up their preparations for this Sunday's match against New York City FC, but goalkeeper Bobby Shuttleworth recently took some time to reflect on how the defense is shaping up in the beginning of the season.

The Revs dropped a 3-0 decision last Sunday against the Seattle Sounders to open up their MLS campaign and did not look the part of an Eastern Conference contender. Considering that Seattle's partnership of Obafemi Martins and Clint Dempsey surgically pulled apart the Revs' back-line, Shuttleworth pointed out there still is work to be done and kinks that need to be sorted out.

"It’s not the easiest thing to communicate along the back-line with 40,000 people [yelling]," he said. "It’s something we’ve worked on a lot and is something we will continue to improve upon and obviously it’s going to take time. We need to keep improving on it week by week."

While patience and understanding are being preached, the Revs frankly did not start the season in the direction they would have liked. Andrew Farrell and Jose Goncalves struggled to form a cohesive partnership, all while Chris Tierney and Kevin Alston encountered their own challenges in the team's defensive third. 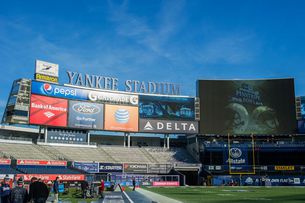 So there's a good chance that the Revs and NYCFC game could tear up the grass at Yankee Stadium and some of the baseball players aren't thrilled about it.

It is early in the season though, so there is time for issues to be corrected and synergy to be furthered along. As more games are played and familiarity among the back-line increases, there is every reason to believe that tangible improvements will appear on the field.

Looking ahead to Sunday's game against NYCFC, forging increased awareness along the back-line will be of the utmost concern. NYCFC has the offensive talents of David Villa and Mix Diskerud at their disposal, but their offensive approach still is a bit of an unknown commodity.

Since there is little to go off of, the Revs will aim to strike a balance between focusing on their opponent and the ways they themselves can approach the contest.

"There’s not a lot of video on them as a team, but obviously a lot of guys have been in the league for a long team and [there is] David Villa up top," Shuttleworth said. "For us we have to worry about ourselves and what our shape is and our organization and communication. We definitely look over them and what their tendencies are from the first game, but also things we need to do."

Adding to Sunday's plot will be the fact that Yankee Stadium, which will host the match, will have a field with smaller dimensions. The decreased space will create challenges for when Revs' players have the ball at their feet, but also significant ones for the team's defensive shape.

With a condensed playing surface, strong communication, unwavering commitment, and sound positioning will be elements that the Revs' back-line, as well as Shuttleworth, will focus on.

"We know it’s going to be a smaller field so the communication, the organization, and keeping our tight lines is going to become even more important, especially for goalkeepers," Shuttleworth said. "The ball can come from anywhere. As a goalkeeper you have to be prepared at all times and make sure your starting position is correct and you’re always on your toes."

Taking into account the various challenges NYCFC and Yankee Stadium present, the Revs are aware that a better defensive performance is required on Sunday. With that in mind, the team feels prepared and is confident that all eleven players on the field will be tuned in for all ninety minutes.

"We know what our roles are as players and we know what our objectives need to be and how our organization needs to be," Shuttleworth said. "It’s something that we [will] continue to work on."