Revolution 0-3 Sounders: Player Ratings and Man of the Match

The Revolution lost to the Sounders on Sunday. There were not many strong performances in the defeat.

Share All sharing options for: Revolution 0-3 Sounders: Player Ratings and Man of the Match

Steve: Never really did much wrong, but can't give a goalkeeper a good rating when he ships 3 goals. Distribution average at best...Nick: Never had a chance to prove himself. Snared a few aerial balls and seemed to communicate well, though his back line left him out to dry on each of Seattle's three goals.

Steve: Solid defense and dangerous service. Caught out at times, but that's more on the center-backs than CT8, who played his usual game...Nick: Looked good moving forward (per usual) and hit a handful of tasteful crosses. Unfortunately, Seattle's attack dominated the left flank, leaving Tierney exposed on a number of occasions.

Rudy striving for more in his career 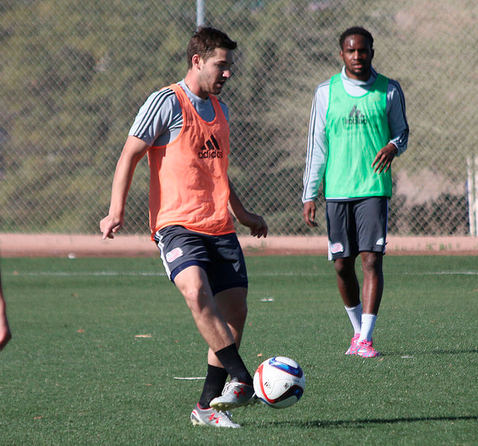 Tyler Rudy didn't take the easy road to an MLS roster, but he's working to get much much more.

Steve: Statistically good day, with 75% passing, 2 interceptions, 7 clearances, 7 recoveries. However, abused on the second and third goals, constantly out of position, decision-making poor. "Needs discipline" is the understatement of the century...Nick: Trust me, I'm Farrell's biggest fan. But this was his worst match in navy and red. Erratic passing and miserable positioning doomed the Revs from the get-go...an uninspiring debut.

Steve: Similar to Farrell, was pretty beastly on the stat sheet, but chemistry with his new CB partner clearly isn't there. Ball-watching on the third goal...Nick: Not his best day. Made a couple of strong challenges, but also picked poor positions on crosses and set pieces. The captain should always be the hardest working player on the pitch - and Jose was not.

Steve: Crossing better, but it was easy to forget he was on the pitch for wide stretches...Nick: I do think Alston is the best right back option - he just didn't show it on Sunday. Looked mesmerized by Martins and Dempsey over the ball, and his defending suffered as a result.

Steve: 86% passing on 64 attempted passes, a clear team-high. Also lead in tackles (5). Scotty had a quietly solid game, should bode well for the future...Nick: Perhaps nobody benefits more from Jermaine Jones than Scott Caldwell. The middle of the park opened up, and Scott could do nothing about it.

Steve: Some were down on Dorman, but he also put in a decent shift. Nearly 84% passing rate, got forward, used his height well in midfield. Not as present defensively...Nick: Routine shift from the wily vet. Clogged up the middle and minimized mistakes in an abbreviated showing.

Steve: Ripped off the best chance of the match and made a lot of high-pressure recoveries. Still struggled with directing the attack, but that may have been rust...Nick: Hasn't looked himself in quite some time. Looked sloppy over the ball and lacked the creativity necessary to support Agudelo up top.

Steve: Drifted in and out. Nice to see him take a shot from range, but needs to work harder defensively and find ways to stay involved when the game isn't coming to him...Nick: Diego disappeared for long stretches, but was at the heart of the attack when things went well. One of the few midfielders with creative ideas in the attacking third.

Steve: Stellar forward defense and tracking ruined by horrific passing. An amazing 7 recoveries, covered a lot of ground, needs to be more careful with the ball...Nick: As always, Teal outworked his teammates - and it showed. Needs more polish in the attacking third, but generated a handful of promising chances.

Steve: Clearly hasn't played competitive soccer in almost a year, tired quickly in the 2nd half. Was clean with the ball when he got it, but didn't make the dangerous moves you expect from a lethal forward...Nick: Looked remarkably fit and played his hold-up role well, though his attacking 'mates offered little-to-no support. Also, the penalty...his momentary sloppiness started the snow ball.

Steve: In 34 minutes, he misplaced one pass. One. However, dispossessed twice and failed to provide the spark the attack needed...Nick: Often forgot Daigo entered the match--just had no impact. His skillset appears far more valuable in a starting role.

Steve: Failed to generate much in his time on the pitch, but didn't necessarily make many mistakes. 2/4 on the dribble, maybe needs more care with the ball...Nick: In limited action, Okoli showed his potential up top. Decent ideas and quick decision making will benefit the Revs down the stretch.

Steve: Did not misplace a single pass. Unfortunately, didn't do anything else, either...Nick: Wandered the field at will, and wanted to get involved, though he came on too late to make an impact.