Which Revs Youngsters, Newcomers Should You Keep On Eye On Tonight Against Seattle?

With the Revolution's season opener in less than two weeks against the Sounders, there's a good chance that the Jay Heaps won't tip his hand by playing his starters that long. So who should you keep an eye on tonight?

Share All sharing options for: Which Revs Youngsters, Newcomers Should You Keep On Eye On Tonight Against Seattle?

The New England Revolution are in a rare situation against the Seattle Sounders tonight in the third game of the Desert Diamond Cup, because the Revs open at Seattle on Sunday March 8.

So the train of thought here is that Jay Heaps will likely give his backups an extended look as to not tip his hand for the opening game. And with Jermaine Jones and Lee Nguyen on the shelf with injuries for most of the preseason, there's a good chance the Sounders will see a slightly different Revs team than the one that went to MLS Cup a few months ago.

So with the regulars getting an extend rest, that leaves the youngsters and newcomers to fill the void and the staff will be looking out for a number of different things tonight.

There's a lot to like about Okoli, not only that he's young and talented but he arguably has a great mentor in the Revs system with Teal Bunbury. Okoli can probably play up top as a lone striker, but something tells me he's ideal for backing up Bunbury as the "target winger" on the right flank. Both players are taller than six feet (Okoli's listed a 6'1") and while certainly it's good to see Okoli getting forward and taking shots, he had a goal ruled out for offside against RSL, what I want to see is how he fares defensively out wide. I'm a big fan of what Bunbury does defensively for the Revs and it will be interesting to see if Okoli can give the same two-way effort if given the chance against his old club in preseason. 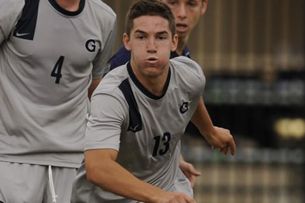 Revs trialist Tyler Rudy might have spilled the beans on Twitter that he's signed his first pro contract with New England, Jon Sigal has the details.

As reported on his Twitter account, Rudy recently signed with the Revs. If that doesn't give you a reason to keep an eye out for him when the Revs take on the Sounders, I don't know what will. He's the only true rookie on the roster now and as a former Georgetown Hoya, played almost his entire career with current Rev, Steve Neumann. He should provide the Revs with decent depth in the center of the park, especially given the fact that some of the current center-mid's are in their thirties and could miss time with the Gold Cup this summer. Lastly, his playing style catches the eye and is impressive. He is in the mold of an old-fashioned center-mid who circulates the ball and pushes the tempo. He has a solid passing range, covers a lot of ground, and can pick out any runner in front of him.

Mulgrew has established himself as a relentless attacker who can do work on both sides of the ball. Midway through the first half of the Revolution's Desert Diamond Cup opener, Mulgrew stole the ball from a RSL defender before marching in on goal. In the second half, the 22-year-old nearly got on the score sheet when he got his head on a Chris Tierney cross. These are the types of moments that make a trial successful. With two more games left to play, I'd like to see Mulgrew grab a goal or assist to solidify his case for a contract.

Woodberry has, in my opinion, a foot in the door already in terms of earning a contract. Why? For the sheer fact that he's the only trialist in camp that can offer depth along the backline, specifically at center back. With only Darrius Barnes as a capable backup to Andrew Farrell and Jose Goncalves, the Revs will need to secure a center back for the upcoming season without a doubt. Unless they have some irons in the fire in the international market, Woodberry seems to fit the bill, even if he spends most/all of the season in Rochester. The Texas-native has logged somewhere around 130 minutes at center back this preseason and has been with the team since camp opened, meaning that he's had great opportunities to learn Heaps' system. Should he produce another solid or above average outing on Wednesday against Seattle, presumably as a second-half sub, I don't see Woodberry not wearing navy blue come March.

Is there another player you're excited to watch tonight? Leave your thoughts in the comments below and come back for the live stream/thread later tonight when the Revs and Sounders kick off from Tuscon, AZ at 8PM EST.