One week from today, the New England Revolution will release their new secondary kit. We're here to help you decide which name you should put on the back.

One week from today, the New England Revolution will release their new secondary jersey at an event at the House of Blues. The new kit is rumored to be inspired by the flag of New England, which will surely cause many fans to open their wallet. If you are buying a new shirt this year, the big question to answer is which name should you get on the back? Fear not, we’re here to help.

Is this the Revolution's New Secondary Kit? 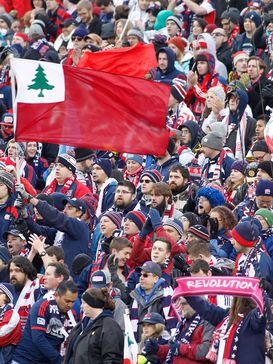 A leaked image has been making the rounds. Take a look at what could be the Revolution's new secondary kit.

There are three main players on the Revolution and their names will likely appear on a lot of jerseys. That doesn’t mean they’re bad choices. They’re just the common choices. The positive to choosing any of these names is that the shirt can also be donned during US National Team games. Jones and Nguyen are part of the current setup while Agudelo has the potential to be called up if he regains his 2013 form.

If it truly is a jersey inspired by the flag of New England, you have to at least consider the local boys. Fagundez will be a popular option as he is a Massachusetts native with a lot of name recognition. Likewise, Davies has created a devout following because of his early performances with the USMNT and his recent playoff heroics. Tierney and Caldwell are under-the-radar names that will certainly be picked by some fans looking for that homegrown flavor.

You’re a dedicated Revolution fan and you want to show it off by making an unconventional choice. You want to talk about JoGo’s shielding ability, Farrell’s move to the middle, Bunbury’s role as a target winger, or Rowe’s potential as a national team player. You know that the name on the back of your jersey is an expression of your fan hood and knowledge. As a result, you go with something a little different. These are all fine choices, but they’re just a little off the beaten path.

Sure, they aren’t establish players but they do have loads of promise. Now in his second year, Neumann is looking to become more than a reliable option off the bench. Meanwhile, Okoli has relocated from Seattle and has looked sharp this preseason. Finally, Smith is hopes to become Tierney 2.0 by moving to the back line. Picking any unproven commodity is a risky move but it could be a worthwhile investment if they become a regular starter. Plus, you’ll look like a genius if that player scores the game-winning goal in the MLS Cup Final.

Instead of going with a player’s name, opt for something a bit more creative. You can put your name and number to experience life as a professional soccer player, or go with a familiar nickname. You can also display your allegiance by putting "Rider" or "Rebel" on the back. Since it’s rumored to be in the vein of the New England flag, put your state’s name. It’s your jersey, you can do whatever you want with it.