Former Revolution speedster Sainey Nyassi has agreed to terms with FC Edmonton, joining the Canadian club ahead of its fifth professional season.

After a seven-season campaign with the Revolution--and one-season stints with D.C. United and Rovaniemen Palloseura (Finland)--midfielder Sainey Nyassi has settled with NASL side FC Edmonton. Over the course of his 11-season professional career, the 26-year-old Gambian International has made an impact for both club and country, earning continual praise from coaches, fans and front offices alike. 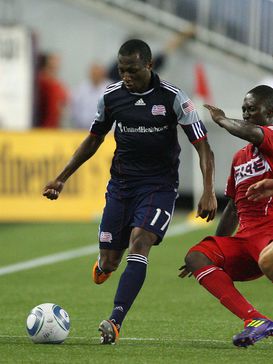 Seth Macomber connected with Nyassi in July 2014 to chat about the winger's past, present and future

"I'm excited to join the team and looking forward to working with the players and coaches," Nyassi said in a team release. "I am thankful for the opportunity, and I just want to contribute to the team's success."

In 108 appearances for the Revolution, Nyassi scored eight goals and added four assists; 2010 served as his best MLS season, when the speedy winger contributed three goals and two assists in 27 starts. For Nyassi, however, an approachable personality--and perseverance in off-the-field battles--has overshadowed a humble resume, encouraging fans to rally behind the hard-working midfielder.

In 2010, while traveling with the Gambian National Team, Nyassi contracted Malaria, a disease that attacks the blood stream and, over the course of several weeks, causes nausea and fatigue. Shaken but not marred, Nyassi competed in the final match of the 2010 season, a 2-0 victory over the New York Red Bulls. In 2011, the young midfielder started 21 matches before injuries forced him out of Jay Heaps' system; he signed with D.C. United before the 2013 season.