If the Revolution front office is waiting for Jermaine Jones to make a decision about 2016, they're going to miss out on the bulk of the 2016 MLS offseason.

Last week, New England Revolution general manager Mike Burns spoke to CSNNE about the future of Jermaine Jones and NE Soccer Today has a good recap. It's not a particularly insightful interview, since Burns can't go into specifics of the negotiations, but it's not just the inaction with Jones the Revs have shown that startles me.

Various members of the Revolution have stated that they want Jones to return next year, but while the Revolution wait for Jermaine Jones to make a decision, the early stages of the MLS offseason have begun. If that's the case, it seems that Jones' decision is holding up other moves for the Revs and that is a terribly bad thing for New England.

Teams have begun signing free agents from the new MLS Free Agency list, notably Justin Mapp signing with Sporting Kansas City is a really good deal. Marco Pappa is heading to Colorado from Seattle for allocation money and the LA Galaxy just traded for keeper Dan Kennedy. Basically, the MLS offseason has begun for many teams, from contenders to teams rebuilding, but there has been almost nothing from New England. Rumors of Will Johnson, my first choice to replace Jones via trade, to the Chicago Fire are rampant.

The Re-Entry Draft (RED) already had its first stage, with not that much movement only two players getting signed, but there were deals that allowed FC Dallas to move up and take Maxi Urruti. The deadline for the Revs to resign or trade their RED eligible players, Alston, Hall and Dorman, is tomorrow.

I'm already on the record for resigning Jones long term, but the Revs at this point can't put an offer at the table and wait for Jones to sign it while he gets other offers from outside of MLS. They need to be actively and aggressively pursuing Jones to resign before it becomes harder or near impossible to acquire a replacement. Right now, the fans see zero activity coming from the Revs and that leaves a sour taste in the mouths of many. Options were declined weeks ago on several players, and I would've assumed that Steve Neumann (not RED eligible) and either Kevin Alston or Jeremy Hall would be resigned at this point. 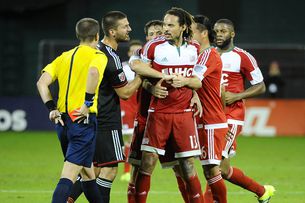 Jermaine Jones' potential 2016 season will start with a six-game suspension for his actions involving referee Mark Geiger in the Revs' 2-1 playoff loss back in October.

There will always be more players selected on Stage Two of the RED because that gives teams the option to negotiate a new deal with the players rather than picking up their option at full price. But with the Revs picking in the middle of both the RED and SuperDraft, they might need to make smaller deals to gather more assets to improve their chances at landing a better player in either draft. Of course, they could also resign any of their RED eligible players tomorrow morning before the window closes ahead of stage two of the RED.

Andy Dorman is out of contract but if Jones doesn't come back would be a solid depth option or a platoon with Daigo Kobayashi but it's not fair to make Dorman wait to see what Jones does first either. Both Alston and Hall had good moments last year at fullback, now an incredibly thin position on the depth chart for the Revs. I am the first to laud the Revs' front office for the little moves they make, getting players like Kobayashi and Sean Okoli for draft picks for instance, because those moves add value and depth to a team that's as ready to win now as any in the league.

Many fans lamented the lack of transactions during the summer as the Revs stumbled to a 5th place finish in the East and first-round playoff exit. Every team in MLS, especially the Eastern Conference, made significant moves to improve with Didier Drogba and the Montreal Impact benefiting the most. The Revs can not sit back at the early stages of the MLS offseason and see talented players like defender Steven Beitashour probably traded within their conference at a position of need.

The core of the New England Revolution is a year removed from an MLS Cup appearance, though an important piece of that season was Jermaine Jones. The longer the Revs wait for him, the less time they will have to sign, deal or scout for his replacement. All while the MLS offseason and SuperDraft continue on as the Revs, wait for their Designated Player to resign.

I am not as cynical about the Revs front office as most. With MLS basically inventing a new player signing mechanism every year, the amount of solid transactions and draft picks (and blind draws) the Revs have made over the years is staggering, and they deserve a lot of credit for those moves. But this isn't a roster move that affects the cap, Jones is a DP and already carries the max cap hit. This is essentially just a straight up contract negotiation that the Revs can't afford to lowball or wait on, they need to do everything to sign their captain yesterday if they want him for next season and beyond.

The Revs front office will also deserve and receive criticism not for just for letting Jones go, there's a lot of people who don't like the idea of signing a older player to a long term deal. But rather, the criticism should be directed at Mike Burns and company for allowing that decision to take up too much time in the offseason structure. The SuperDraft is a month away, the next RED stage is Thursday and preseason will be here in about six weeks. Hinging the bulk of your offseason plan on waiting for Jones to decide if he wants to resign in New England is not a viable strategy.

Now is not the time for the Revs to leave an offer in front of Jermaine Jones, at this point they have to force the issue. If they want Jones back as they stated they have, they're going to have to prove it; make a better contract offer, help Jones' family with relocation to Boston, consult Jones on other potential offseason moves. If the Revs are willing to have Jones next season, they should also be prepared both on the field and financially to have Jones end his career in New England. Again, something I don't think is a bad thing on or off the field.

The bottom line is the Revs waiting for Jones' decision will put them behind for 2016. Getting Jones to sign now, rather than six weeks later, also gives the Revs more time to improve the roster and focus on other areas of need. Also, the longer the Revs wait, the more players in MLS that will be off the market, forcing the team to likely look internationally or in the lower divisions of the US. Remaining stagnant this offseason after making zero moves during the summer will not lower the expectations the team established with their MLS Cup run in 2014.

The clock is ticking, and the rest of the league gets better every day.