The USMNT is in Port of Spain, Trinidad for their toughest test of the semifinal round of CONCACAF World Cup qualification. Can Jurgen Klinsmann's team conjure up some Paul Caligiuri magic and end a dismal 2015 on a high note?

The United States started their road to the 2018 World Cup with the easiest fixture on the schedule. So it's only fitting that their second game will be the toughest.

Trinidad and Tobago were the 6th seed going into the draw last year, ranked 80th in the world at the time (now up to 54th), they were the lowest seeded team with a bye into the semifinal round. While this is still a blessing for the USMNT having to play in the easiest group, that doesn't mean the Soca Warriors are a pushover.

Because unlike the USA last month, Trinidad actually stood toe-to-toe with Mexico earlier this summer, with a wild and crazy 4-4 draw in the Gold Cup group stage.

You can complain about a lack of defense or the inability to close out games, but that was one of the most entertaining games of soccer I've ever seen. And arguably, that's the kind of soccer that I want the US to be playing. Good defense, getting out quickly on the counter but still being able to build up through possession if the counter isn't there.Of course it helps that both Mexico and Trinidad finished multiple long-range, laser efforts in that game but the US can't be afraid to take half chances or shoot in general, something they haven't done a lot of in 2015.

Trinidad plays a good brand of soccer and they will probably be in The Hex when 2017 rolls around, this is the one game that I don't expect the USA to win in the semifinals, but that doesn't mean they can't. What the US needs, is a good game plan that is executed well to get themselves a result, but not necessarily a win. Jurgen Klinsmann was training in Miami specifically for the heat elements his team was going to face later tonight in Port of Spain and let's hope that it pays off. But what tactics will the US be using in this game?

Three Lineup Changes for the USA vs. Trinidad 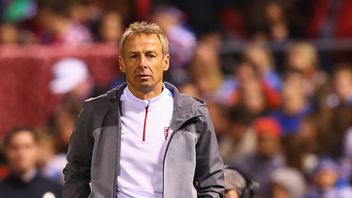 The United States dominated St. Vincent on Friday, but that opening goal didn't sit well with Jake Catanese. So he offers three ideas to help contain the potent Trinidad attack.

I can assure you, this lineup is not happening and there's a variety of reasons why. First, I fully expect Klinsmann to stick with the flat 4-4-2 that worked well against St. Vincent though I think that would be a mistake. Second, there's no way Jozy Altidore will not start despite the fact that I think Bobby Wood is the most in-form striker in the player pool, let alone the current roster. Finally, Klinsmann rarely gameplans for opponents, something I think is a mistake, and a flat 4-4-2 will be exposed defensively by a good offensive team like Trinidad.

So my solution is a combination of the ideas I published this morning, which if you haven't read it you should, is basically trying to eliminate that goal St. Vincent scored. I'm switching to a 4-2-3-1 with two box-to-box wide midfielders/wingers in Fabian Johnson and Mix Diskerud in an effort to help shield the backline as much as possible. That early St. Vincent goal was a dreadful display from the right side partnership of DeAndre Yedlin and Gyasi Zardes and it can't be allowed to continue. I give credit to Yedlin for covering Cameron centrally, though he got burned badly in the middle on the goal, but that was one opportunity for St Vincent that resulted in a goal. Trinidad will get far more than once chance.

So the idea is to limit their chances as much as possible on the defensive end. Kyle Beckerman enters for the possibly hobbled Jermaine Jones and partners with Michael Bradley in front of the backline. Beckerman is the stay-at-home holding midfielder while Bradley gets to roam around and do what Bradley does. Out wide are two players in Johnson and Diskerud that can go box-to-box defensively while also adding positive elements to the offense on either the counter or traditional possession build up.

Here's where my lineup mostly falls apart. Jurgen Klinsmann has essentially called in only one true central playmaker on this roster, and that would be Darlington Nagbe. No one, in their right mind, would suggest giving Nagbe his first start on the road in the toughest game of the group. Thankfully, I'm not in my right mind since I'd start Bobby Wood over Altidore as well.

Essentially, I think this is the most balanced lineup the US can put together. I don't mind taking a draw from this game, but there's enough offense in the lineup and on the bench in Altidore and Zardes for the US to change things up in the second half. Obviously what Klinsman does late in the game depends on the scoreboard in the second half, but defensively even a less than 100% Jermaine Jones is a good option as well as moving Fabian Johnson into the backline (likely for Yedlin moving Tim Ream to right back) and using Brek Shea or Miguel Ibarra out wide to help close out the game.

Let me explain why I'm not exactly thrilled about tonight's game. I assume you remember that earlier Trinidad-Mexico highlight video, but here's what Kenwyne Jones did at Guatemala on Friday (:50 second mark):

Yeah, I really like Kenwyne Jones (hint, hint, New England Revolution) and that is a full volley, first time on a really good cross which is really hard to defend. That's why I want the extra support in the middle of the field with the holding midfielders, to limit the number of times Kenwyne Jones can get on the end of chances like that. Not only is Kenwyne Jones good at soccer, but Trinidad is too and there's a lot of MLS connections here. Two starting defenders for T&T, Joevin Jones and Daniel Cyrus, both play for the Chicago Fire. Second half substitutes Kevan George and Cordell Cato play for the Columbus Crew and San Jose Earthquakes respectfully.

This is a T&T team that is largely comprised of non-domestic league players, with only 5 players selected from the domestic league, the same of US-based players. Perhaps the one weakness for Trinidad against the US, it would be in goal, with both Jan Michael Williams, who started and did really well against Guatemala, and backup Marvin Philipp both playing in their domestic league. But since the US hasn't been taking many shots this year it remains to be seen if they'll test Williams should he get the start.

The lineup I described for the US above is mostly designed to deal with Kenwyne Jones in the middle of the field. Yes, Trinidad will still probably send in crosses but it will likely be against an established US defense, giving Cameron, Besler and Beckerman plenty of time to intervene and clear their lines. While it's a more defensive minded lineup from the US, I want to see them on the counter attack in this game, getting Nagbe involved on the ball early and often. On the build up, the wide players in Diskerud and Fabian Johnson can fit both the possession build up and the counter, so the US shouldn't be stranding Wood or Altidore up top.

The importance of this game is very clear, these are the two best teams in Group C and both won their first game on Friday. The United States and Jurgen Klinsmann have been under fire for most of the year for poor results in key games, and ending the 2015 calendar year on a high note will go a long way to quash some of the criticism going into the winter break. A win today would also put a big gap between the USA and their biggest threat in the group, since Trinidad and the US are the clear favorites to advance into the Hex in 2017.

We're also just two days shy of the aniversary of Paul Caligiuri's "Shot Heard Round the World" in 1989, the goal that sent the USMNT to their first World Cup in forty years when they qualified for Italy in 1990. T&T keeper from that game and current keeper coach with the national team Micheal Maurice remembers the strike that got by him on that fateful day in USMNT history. Caligiuri himself talked with The Guardian in another length post