The road to Russia 2018 begins in St. Louis, on a baseball field. Basically, welcome back to CONCACAF.

Share All sharing options for: United States-St. Vincent and the Grenadines Preview

Let's get the easy stuff out of the way first. Saint Vincent and the Grenadines are ranked 129th in the world, they've qualified for only one Gold Cup back in 1996 and last made the semifinal round of CONCACAF World Cup Qualification back in 2006. They notched two wins against St. Kitts and Nevis but failed to register a point against Mexico or Trinidad and Tobago in that campaign.

Early verdict on #USMNT field: not perfect but not bad. Should not be a factor pic.twitter.com/mowIRvWqsf

Okay, baseball stadium jokes aside, St. Louis is a pretty good soccer city and squeezing a soccer field over the whole infield is actually something I'm looking forward to seeing. Our friends over at Stars and Stripes FC have more on the field, but I don't think it will be that big of a deal, even if the entire infield is covered in temporary sod. This however, is based upon the fact that United States head coach Jurgen Klinsmann actually puts a lineup out that can use the smaller field to it's advantage. 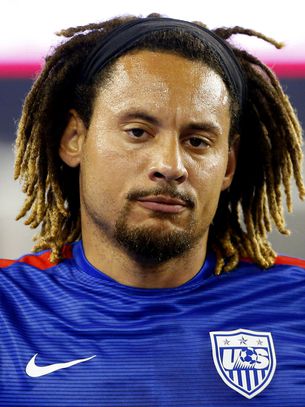 Revolution midfielder Jermaine Jones has a rare chance to play extra games after his MLS season ended in the playoffs. A good impression in qualifying couldn't hurt his chance for either club or country.

Okay, it's a weird field against a bad team and this lineup is a weird balance of juggling a tougher match in four days and keeping some continuity on the field. So I'm bringing back the slightly narrow diamond midfield with "shuttler" midfielders in the middle. This gives both fullbacks, Shea and Yedlin, a lot of room to get forward and support the attack. This allows some of the younger players to make a big impact and keeps a lot of the veterans rested for Trinidad.

Guzan has already been announced as the starter against St. Vincent's with Howard starting at Trinidad. Though I'd prefer the two centerbacks building chemistry with just one starting keeper, I don't mind the rotation from Klinsmann nearly as much. With Howard getting the nod at Trinidad, I think that means he has the edge to claim the starting job following his post-World Cup sabbatical going into 2016 and Copa America next summer.

The only thing I really want to keep together despite the preparation for Trinidad, is the starting centerback pairing. Besler and Cameron have been pretty good despite the USA's struggles to get results and maintaining their good partnership in the back, regardless of Howard or Guzan in net, is critical for the US going into the road game at Trinidad. Would I mind seeing Matt Miazga get cap-tied tonight, not at all, especially against the minnow of the group at home. But Miazga should be absorbing this experience as much as he can as he transitions from the U23/Olympic roster.

I do not want to see Shea or Yedlin on the wings today. Shea is listed as a defender and Yedlin as a midfielder but I'm tired of this game from Klinsmann. I'm one of the biggest fans of Yedlin as a winger, especially off the bench, but not if he's a starter at the position with the USMNT. He's been playing fairly well at fullback on loan at Sunderland in the English (Freaking) Premier League and should get the nod against a weaker team tonight. You have to see if Yedlin can play the position though Tim Ream is a viable option there as well. Fabian Johnson's exile continues for one game to, you guessed it, keep him fresh for Trinidad.

I will hear arguments about starting Darlington Nagbe on his debut at either of the shuttler midfield roles or as the CAM but Bradley is still a start and will be playing somewhere. Ibarra and Diskerud get the starts with one likely coming off to get Nagbe his cap at some point. I opted for Beckerman over Jermaine Jones solely on keeping the latter fresh for the Trinidad game but again it's an either/or spot here as well.

Up top, Bobby Wood is right now the most in-form American striker, period. He should be starting. Jordan Morris gets the start next to him, not just keep Jozy Altidore rested but to give him extended minutes as well. Alan Gordon is essentially a spot substitute off the bench, especially if the US is chasing a goal in Trinidad but it wouldn't surprise me to see Zardes get some minutes up front either rather than on the wing.

#USAvVIN Previews We Like: The Yanks Are Coming, Stars And Stripes FC

Now, why do I want to keep a lot of the US regulars fresh for the Trinidad game? It's not because this game should be a cakewalk, but Trinidad is playing at Guatemala today, a match that is usually a slugfest and physically draining. Trinidad is a good team but just how deep they are could be tested on Tuesday. Trinidad won't have the luxury of resting a lot of key players like the US has today, so that's something I would take advantage of.

This is a largely domestic based squad though there are a few interesting players on the roster. Two players ply their trade in Finland, defender Reginald Richardson and forward Cornelius Stewart and both have over 30 international caps. A pair of USL attackers from Seattle Sounders 2 in Myron Samuel and Oalex Anderson have a combined 57 caps and 22 goals internationally.

This is probably a team that will bunker and try and hit out on the counter, but it's also a team that is not going to be nearly as effective as a team like Haiti at either. Haiti played a really attractive style against the USA during the Gold Cup despite the fact the US won the game 1-0. I don't think St. Vincent's can generate that much offense, but with the US expected to dominate possession and pushing their fullbacks forward, the counter attack should be available for the Vincy Heat.

As much as it pains me to say the cliched, "Don't look ahead to your next opponent," that's basically what I'm doing here, and largely what I expect Klinsmann to do as well. The USMNT should be able to put out a solid "B" lineup with a good tactical game plan and win this game easily. That said, putting together good lineups and coming up with tactical game plans aren't exactly a strength of Jurgen Klinsmann at the moment. I'd rather not waste guys like Fabian Johnson and Jozy Altidore to win this game but if the US is struggling in the second half it wouldn't be the end of the world to use them as closers to nail down the result.

But it should have to come to that. The US should be able to easily handle St. Vincent's and give a lot of their younger and inexperienced players minutes in the process. The match kicks off on ESPN2 at 7PM.