Sean Okoli is officially a member of the Revolution. Now get some extra information on the new guy.

Share All sharing options for: A Primer on New Revolution Signing Sean Okoli

The New England Revolution worked out a deal to sign Sean Okoli, whose rights they acquired in a SuperDraft-day trade with the Seattle Sounders. Okoli is a young talent, just a year removed from signing his Homegrown contract with the Sounders, and immediately creates some depth at the forward position.

In the spirit of that signing, we spoke briefly with Dave Clark, the managing editor of Sounder at Heart, to learn what we could about Okoli and his possible future with the Revolution.

Okoli Excited to be a Rev 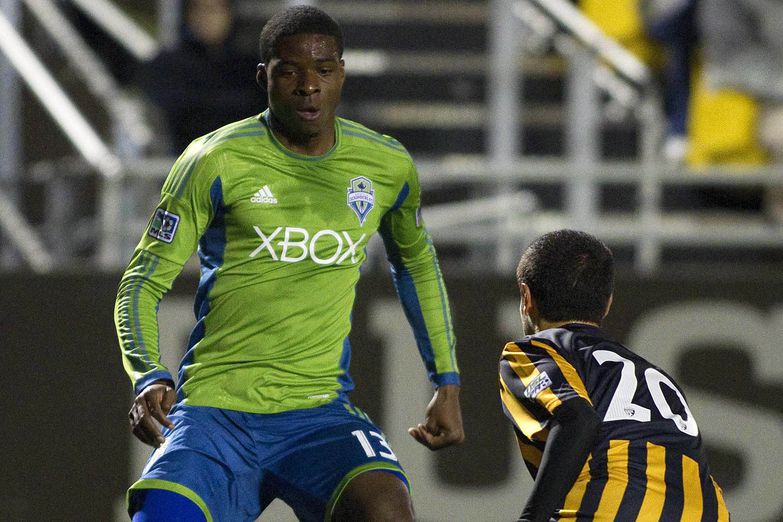 With news that his rights were sent to New England, Sean Okoli expressed excitement at the prospect of arriving in Foxboro.

TBM: You described Sean Okoli in your profile as a forward, not a hybrid winger. The Revs play a 4-2-3-1 where the lone forward needs to be able to do at least some hold-up work and create for others. Is this something Okoli can do, or, alternately, learn?

DC: Okoli is kind of like Eddie Johnson, not at that skill level, but he can play out wide to some effect, but he's just so much better in a box (at least that was true for the Reserves, Wake Forest and Academy). He has a bit of strength, but not the height. So if he's in a one-forward set don't expect him to be the header on goal type, more of a passer with his back to goal.

TBM: Currently, the Revs' forward corps consists of Charlie Davies, Jerry Bengtson (who is on loan), and possibly the un-signed Tristan Bowen. Where do you see Okoli fitting into that rotation?

DC: He'll beat out Bowen. Bowen is much more of a winger that should charge on goal. If those are the lone forward options in New England than I would expect Okoli to get regular time in the 18. He's young, but Heaps trusts his youth. Can Okoli beat out Bunbury shifting up from the wings? That would be less expected.

TBM: Do you see Okoli as a candidate for loan to USL Pro?

DC: I could see short term loans, but if he was going to be a full-time USL PRO player he would have signed with Seattle and played here.

TBM: What would you say is Okoli's greatest strength? His greatest weakness?

DC: Probably his quick trigger on his shot. He's not great at anything. Okoli is more a collection of pretty good forward skills.

TBM: Anything else you think we should know about our newest forward?

DC: He has an intense pride in his time with the USYNT and really wants to get back into that picture.