The Revolution are in desperate need of a central defender and another striker. But with only one pick in the first two rounds of the upcoming MLS SuperDraft, the Revs will be wise to add to the defense in the second round.

I do not envy the job that Brian Bilello, Mike Burns and the rest of the New England Revolution front office has at the moment.

The Revs, fairly successful over the last few years in adding talent through the MLS SuperDraft, particularly through the first round, are left without a pick until #33 in the middle of the second round. Two trades, one that brought Teal Bunbury from Kansas City cost them their first round pick and another that sent Dimitry Imbongo and Geoffry Castillion to Colorado to clear international spaces to protect the roster in the expansion draft.

Now with A.J. Soares presumably off to Italy and Patrick Mullins and Tony Taylor selected by New York City FC in the expansion draft, the Revs have been quietly adding pieces to the roster to fill in the gaps. Acquiring Tristan Bowen in the re-entry draft and trading for Jeremy Hall from Toronto FC have helped bolster the thinning ranks up front and in the backline. 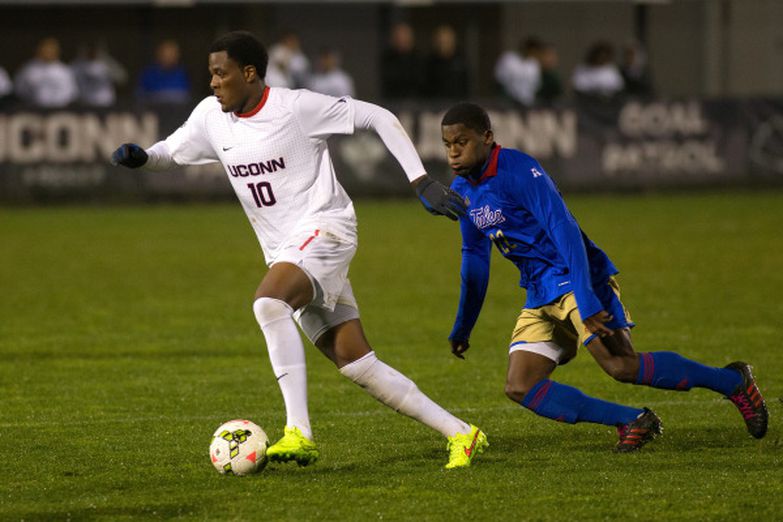 The Revs only have one pick, but don't miss the rest of SBN's Mock Draft, including another UConn Huskies start, Cyle Larin, going #1 overall or Orlando.

But the center of the defense still remains the most glaring hole on the Revs depth chart, with a likely solution having Andrew Farrell move inside and start either Hall, Darrius Barnes or Kevin Alston on the right. But that leaves the Revs with only one true centerback on the roster, Jose Goncalves, with Farrell and Barnes utility shoring up the depth chart.

And without a pick until the middle of the second round, the highly rated defenders will likely be off the board, but there's a surprising good cluster of prospects that should be available when the Revs are on the clock, and in our mock draft I selected Connecticut defender Sergio Campbell.

I'll wait for you to get out all the homer jokes...

Okay, Campbell is a Jamaican international, with two caps in his young career at the senior level before making a college career first at the University of Central Arkansas before transferring to UConn in 2012. Playing alongside 2014 #1 overall pick and countryman goalkeeper Andre Blake as well as possible #1 pick this year in Cyle Larin, the Huskies under head coach Ray Reid have been a near perennial fixture in the College Cup, although a slow start and a weakened American Athletic Conference in 2014 kept them out for the first time since 2006 and only the second time since 1998.

Campbell started all 19 games for the Huskies this season, and according to his team bio, he's appeared in every game for the Huskies since transferring to Connecticut, anchoring a Huskies defense that reached the College Cup quarterfinals in both 2012 and 2013. The big 6-4 defender is also a former captain of the Jamaica U20s and could be a great understudy for Goncalves.

Since I'm no expert at college soccer, I can say I've seen a decent amount of UConn soccer games over the last few years and although Andre Blake and Cyle Larin are the players that steal the headlines, Campbell would be a solid pick up for the Revs. TopDrawerSoccer.com has him ranked #29 on their second big board and to the Revs at #33 in their second mock draft. SoccerByIves had Campbell at #29 to Toronto FC in their second mock draft, also the first version that included the second round. So there's enough evidence to suggest the AAC's defender of the year is a good prospect and worthy selection in the second round.