The Breakers negotiated their third contract in as many days on Friday, signing Breakers Reserve forward Suzane Pires.

The Breakers capped a busy week by signing Brazilian forward Suzane Pires, a product of the team's reserve squad. The news follows the re-signing of forward Katie Schoepfer and utility player Courtney Jones, both of whom carried prominent roles last season, and the waiving of 32-year-old midfielder Joanna Lohman.

"Suzane was discovered by the coaching staff at our open tryouts early this year and immediately stood out as a very technical player with flair and a smart soccer brain," Breakers general manager Lee Billiard said. "Keeping her in our reserve program and training under our philosophy has made her an even better player." 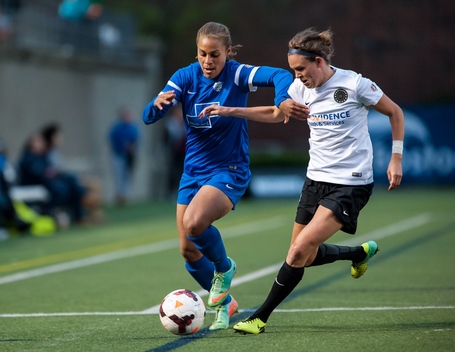 We break down the good, the bad and the future while divvying up our 2014 TBM Player Awards. Read on.

"I am excited for our fans to see Suzane and it's another big testament to our reserve program's identification and development philosophy," Billiard added. "Both head coach Tom Durkin and I are big admirers and Tom will certainly bring the best of her attributes to the NWSL stage."

Late last season, the Breakers showcased the value of their reserve squad, signing product Rachel Wood. The defender recently earned our "Unsung Hero" award following a steady seven matches along the team's back line, drawing affirmation from those close to the team.

Pires will strive to become the second reserve success story, though she will face stiff competition to earn meaningful minutes. The attack looks relatively stable, with youngsters Jazmine Reeves and Nkem Ezurike, along with Katie Schoepfer, likely earning the majority of the starts next season. Still, Pires has the opportunity to serve as the team's "wild card," adding pressure behind Tom Durkin's top forwards.

If nothing else, the São Paulo-born forward will shake up the depth chart, providing creativity and attacking intelligence from multiple positions on the field.