July 9th kicks off the MLS Summer Transfer Window, a time when teams assess their needs heading into the back half of the season with hopes that they can assure themselves a shot at MLS Cup glory. We thought we'd help out the Revs this year and identify some areas that could stand to be improved.

With the MLS summer transfer window opening next week, one can assume that the Revolution will be looking to make some additions to help bolster the squad for the second half of the season and beyond. The Revs' roster currently stands at 28 with four of those players on either short or long-term loan to the Rochester Rhinos for the season.

Perhaps most intriguing is that the Revolution have three international spots available to use. This suggests that Mike Burns and his staff have the tantalizing option of exploring the international transfer market for their summer additions. 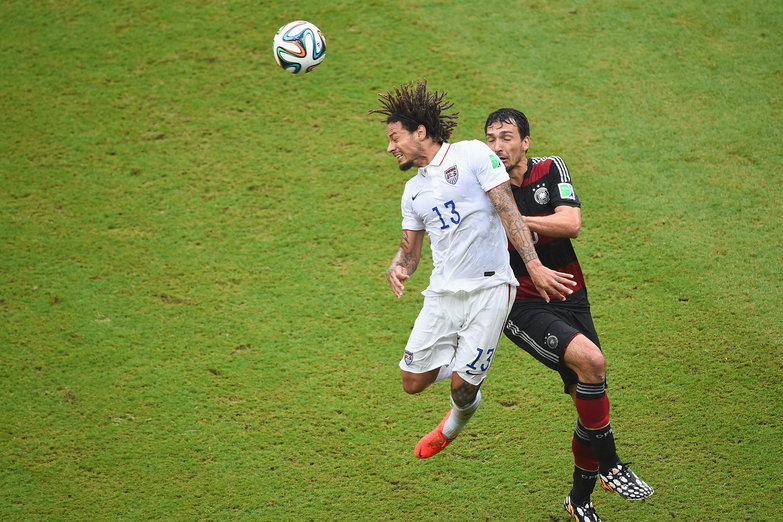 Jermaine Jones is rumored to be looking at MLS. Should the Revs take a run at the USA star?

It's hard to find much dead weight on this current New England roster with just about everybody being contributors or at least potential contributors at this stage of the season. Jamaican defender O'Brian Woodbine was recently waived by the Revs prior to July 1st, which according to the MLS Roster Rules and Regulations is the date that players can be waived by to free up the corresponding cap space.

However, there may still be some transfers out of New England on the horizon. Last year there were internet whispers that French attacker Saer Sene had interest from a handful of teams in France. Although he suffered yet another unfortunate injury later on in the season, he's been recovered from that for most of 2014 and looks healthy again, which may result in some resurfaced interest.

And Honduran striker Jerry Bengtson, fresh off his World Cup campaign with his country, may be the most likely candidate to find a bidder from abroad. In fact, his most recent link has been to Greek side AEK Athens, according to this report on Skygoal.gr. Despite not scoring any goals, Bengtson may still be a viable transfer target for plenty of teams and smart money is that the Revs would be keen to cash in after the striker has significantly underwhelmed in a New England kit.

Whether it's only two spots or more, there's a case to be made for the Revolution to look at strengthening a few particular areas of the pitch in this upcoming window.

Striker - Despite the emergence of rookie Patrick Mullins this season (or at least in the month of May), New England still lacks a clinical bite in the final third. Saer Sene has recently submitted his application to see more time as the Revolution's lone-forward, but one could argue that Sene doesn't really have all the tools needed to fill that role day-in and day-out. A clinical striker who can get on the end of the service coming from the midfield and fullbacks would be a huge asset for the Revs. And one that can also play on the wings would be an even better addition.

More: Revs Targeting Robinho? Would Kljestan Fit? Where are the Preseason Trialists?

Defensive Midfielder - Andy Dorman has done an admirable job as the Revs' isolated defensive midfielder so far in 2014. But the fact of the matter is that he does not truly have a viable back-up or really anyone pushing him for minutes. Scott Caldwell has proved to be a very serviceable central midfielder, but he is not the hard-nosed, physical defensive midfielder that the Revs really need to fill that hole. And Shalrie Joseph, at age 35 and consistently on the injury report, doesn't seem to be much competition for Dorman.

New England seemed interested in finding a defensive midfielder in the off-season, trialing players like Gorka Larrea (now with the Montreal Impact) and giving Paolo DelPiccolo some looks there, but ultimately stuck with what they had. Could someone like Jermaine Jones be the answer?

Winger - Let's face it, Diego Fagundez is the only true winger on this squad. Both Teal Bunbury and Saer Sene have spent time opposite the youngster on the right wing, but neither truly possess all the qualities of a textbook winger. Sene can be useful in the attack but often shies away from his defensive responsibilities. And Bunbury has the pace but not really the mentality of a winger. Donnie Smith has the skills to play on the wing, but is most likely still a project for the next year or so. A player in Fagundez' mold to occupy the opposite wing would do wonders for a New England team that continues to suffer spells of sputtering offense.

Right Back - With O'Brian Woodbine now gone, there's a void left amongst the Revs' corps of fullbacks. Sure, Darrius Barnes can play there (and anywhere across the backline), but a true specialist at the position might be a prudent endeavor for the Revolution front office. Pulling in an experienced right back might allow Heaps to facilitate Andrew Farrell's transition to center back, a spot he shined at earlier in the season with Jose Goncalves out with a knock.

What type of player would you like to see the Revs go after? Do you think there's a certain area of the pitch that needs help more than any other? Let us know in the comments section below!