For the first time this season, the Revs and Crew will meet at Gillette Stadium tonight and we have the low down on Columbus from our sister site, Massive Report, and writer Patrick Murphy.

Share All sharing options for: Revolution vs. Columbus - Know Thy Enemy: Three Questions with Massive Report

These two teams haven't met since a pair of crucial games to end the season last year, with the Revs winning two close games to seal a playoff spot on the last day of the season. But neither team is in the best of form, the New England Revolution have lost seven straight and since starting the year 3-0, the Columbus Crew have just won just twice since April, going 2W-7L-8D since.

Can the Revs get back on track at home with a familiar face wearing the captain's armband for the black and gold? We asked Massive Report's (@MassiveReport) Patrick Murphy (@_Pat_Murphy_) three questions about the Crew. Be sure to check my answers to Patrick's questions over on Massive Report.

TBM: Here in New England, we fondly remember the days of when Michael Parkhurst played centerback and was the MLS Defender of the Year in navy blue. How is Parky doing in Columbus and how has the defense fared with him in the lineup? 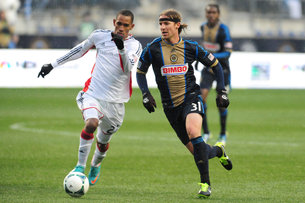 After a long spell or rumors, Jerry Bengtson has joined Argentina Primera side Belgrano on a year-long loan. Nick Hemming has the details

MR: Parkhurst has been a key ingredient in both the Crew's defense this year and the team as a whole. As captain, he has taken on a leadership role to help some of the other players, especially the young guys, and has embraced this with open arms. As I'm sure you know, Parkhurst isn't the most vocal player on the pitch, but his ability to lead by example has been important for Columbus in 2014.

He also allows head coach Gregg Berhalter to play the system he pictured when he took over the Black and Gold. Parkhurst's ability to play out of the back and maintain possession of the ball allow this team to control the majority of the games they've played. Although many of them haven't resulted in wins of late, the coaches and players are generally pleased with the way they played. The Crew traded Chad Marshall to the Seattle Sounders before the season began because he would not help them in possession and Parkhurst has eased that departure by filling some rather big shoes, literally.

TBM: I know Parkhurst has been named to the MLS All-Star Game, but what about having Wil Trapp and Matt Lampson in the Homegrown Game? And did Higuain deserve to be an All-Star this year?

MR: It is nice to have Trapp and Lampson honored as some of the top homegrown players in the league. Obviously Trapp has been a vital contributor for the Crew this season, being the cog between the defense and the attack at just 21-years old. He has played in every game in which he was available this season and has been a top performer for the club.

Lampson's recognition comes from what he did last year - 13 appearances and five shutouts - as he has not played in a meaningful match this season, but he deserves this opportunity. After he successfully defeated cancer in college, it is remarkable he made it as far as he has and the Columbus locals will be proud to see him in this game.

From the perspective of someone who watches Higuain on a regular basis, I believe he should have been an All Star. He is one of the most creative players in the attack in MLS, but doesn't get the recognition that some of the players with bigger names or in major markets receive. With that said, if you asked me who he would replace on the team, it would be difficult for me to give you a name. Hopefully he'll get there one day.

TBM: Gregg Berhalter is a pretty familiar name to a lot of USMNT and MLS fans, what are your thoughts on the job he's done now that he's in the middle of his first season in charge?

MR: I think Berhalter has done pretty well with what he had. I was recently asked to grade him halfway through the season and I gave him a B+. Obviously the year started off brightly and has dropped off since, but there are two reasons I rate him so highly. The first is the style of play. Berhalter brought a clear idea of how he wanted to play to Columbus and is molding the team in that image. The team is building an identity that it lost after the 2008 MLS Cup winning season and that's good to see. Remember, this was a team that has missed the last two MLS playoffs.

Also, the players have the utmost confidence in him and believe in what he is trying to do. Fans are beginning to get restless due to winless and losing streaks, but the players understand the process. They obviously want the results, but they continue to express that they are still learning and want to play for Berhalter and his staff. It takes time to build teams in small markets and I think Berhalter is going about it the right way. In time, I think the results will back that up.

Hector Jimenez and Jario Arrieta are on their way back from various injuries, but won't make it back this week. Josh Williams is out for up to 12 weeks and rookie Fifi Baiden is out for the season. I'm going to say the Crew capitalize on New England's struggles and take a 2-1 win, though 1-1 is probably more likely.