The Case For Jose Goncalves at Holding Midfield

Jay Heaps has been forced to shuffle his lineup around due to injuries and suspensions during the Revs recent slide, but the idea of having a center back move up to defensive mid is a good idea. Heaps just picked the wrong centerback.

Share All sharing options for: The Case For Jose Goncalves at Holding Midfield

About two weeks ago, Seth put out a really good post on who should start at defensive midfield for the Revs after the injury to Andy Dorman. All the regular options were there - Scott Caldwell, A.J. Soares, Andrew Farrell. Even Alec Sundly and Shalrie Joseph got a mention to fill the role which are all good suggestions.

But there was one name that was left of that list that might be the best choice of all.

Now, before I explain why this is a good idea, let's go over the reasons this is a terrible idea. First, Goncalves is still listed on the injury report as "Questionable" and did miss the last game against FC Dallas with an injury. Obviously if he's not at full fitness and isn't available for selection on Saturday then my brilliant idea would have to wait another week. The second reason this could be a bad idea is that it would mean putting Scott Caldwell on the bench, and he was really good last week. 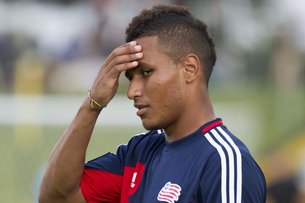 There's a lot of transfer rumors floating around, espcially about Juan Agudelo and Jerry Bengtson, and Corey tries to sift through and make sense of it all.

Despite Caldwell's impressive passing statistics from last week, there are a lot of reasons why I think Goncalves at the holding midfield spot can work. But surprisingly, most of them have to do with what he can provide going forward, rather than back on defense. We all know Jose can defend, but what this team needs right now in the holding midfield spot is a difference maker.

First, putting Goncalves at defensive mid would allow the return of the Revs undefeated backline pairing of Chris Tierney, Soares, Farrell and Darrius Barnes. This pairing came together when Goncalves was injured early in the year and also coincided with Patrick Mullins' breakout in May. It's been a rough go for the defensive line no matter who's been in the lineup, but perhaps returning to a group that preformed so well earlier in the year isn't such a bad idea.

Next, Goncalves offers a different skill set and match up in the midfield spot going forward. I often comment that Jose has so much space to operate with that he should be carrying the ball forward with long dribbles, forcing the defense to react to him. In a way, I'd like to see Goncalves channel his inner Michael Bradley, where he makes 20-yard dribbles into space and finds one of his attackers with a neat pass. The Revs offense has been able to string passes together and get a lot of possession, but hasn't offered a lot of chances on goal. Adding Goncalves to the mix going forward could offer just enough of a different look going forward to open space up defensively.

And Goncalves isn't a slouch with his passing either. According to WhoScored.com, Goncalves' passing accuracy stands at 78.6% with just under 6 long balls completed per game. While it's not the 85-90% Caldwell usually gets, I think Goncalves aggressiveness from the midfield spot will be a benefit, even if it leads to a few missed passes or turnovers.

Another big reason to move Goncalves higher up the field is to give the Revs a legitimate target in the penalty area. The Revs are usually an abysmal crossing team, and it's not just because they're bad at crossing aside from Tierney. There isn't a true target to aim for in the box aside from right wing Teal Bunbury at 6'2". Even if Tierney is sending in half a dozen excellent crosses into the box every week, it's hard to find a teammate in a sea of defenders that are all usually taller than you. Goncalves making a late run after getting the ball out wide could wreak havoc in the penalty area just by being there, creating opportunities for himself but also drawing defenders and leaving others open.

I don't think Jay Heaps was wrong to try A.J. Soares at holding mid, but that experiment did not succeed. Soares wasn't seeing enough of the ball and was getting bypassed too often to have any chance at being effective. Goncalves is going to be able to get the ball and win more aerial duels in the midfield as well, something Caldwell can't do as effectively just based on height alone.

Goncalves is a supremely talented defender, but more importantly, last year, he was a difference maker. That's what the Revs need right now from their reigning defender of the year, for him to make a difference.

They just need it at a different position now.