The 3rd Yellow - Lee Nguyen's Suspension and Penalties at RSL

Allen Chapman pointed to the spot twice last Friday, both times for RSL and both times Bobby Shuttleworth was picking the ball out of his own net. But did the man in the center get the calls right?

Share All sharing options for: The 3rd Yellow - Lee Nguyen's Suspension and Penalties at RSL

That was about as tough a loss as you can take if you're a New England Revolution fan. Referee points to the spot twice, Real Salt Lake scores two penalties and your late comeback is undone by the post.

What makes this worse, is that one penalty is highly questionable and the other is just down right wrong. But I can't blame center referee Allen Chapman for either penalty. The first one is a judgment call on a rule I don't like and think is very flawed and the second is a blown call by his assistant. Oh, and then the MLS Disciplinary Committee suspends your starting midfielder.

Boy this past week was just not fun at all. 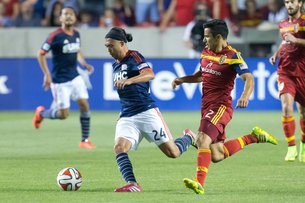 The MLS Disciplinary Committee fined and suspended Revs midfielder Lee Nguyen one game for an incident last week and Corey has all the details.

For starters, MLS announced yesterday that Lee Nguyen will serve a one-game suspension (today vs. Chicago) for stepping on Real Salt Lake's John Stertzer in the 57th minute of the Revs game last Friday. The Disciplinary Committee says that this is an action that is "endangering the safety of an opponent and bringing the game into disrepute."

I'm not going to take any issue with the first half of that quoted statement above, obviously stepping on someone in a soccer game is always going to be endangering the safety of your opponent. Either way, I don't think that this was an intentional act by Nguyen, he was whistled for a foul and I don't see a lot of protests from anyone on RSL about the incident. It isn't a blatant stomp either, despite what the headline will have to believe, but Lee does catch a sliding Stertzer with the side of his cleat.

As for the second part, I'm not sure how this brings the game into disrepute. It's not violent conduct, it's not intentional, it's a soccer play. The fact that the Disciplinary Committee thinks this is a suspension worthy offense means that they have now set an almost impossible standard to maintain for the rest of the season going forward. Now any player who doesn't completely get out of the way of a sliding player, who by the way is initiating the contact/play, can be suspended if he steps on the defender.

I'm all for protecting players on the field, and if Lee had been shown a second yellow card for this play on the field I wouldn't be able to protest it in the slightest. It wasn't reckless or intentional but it was dangerous and on a different day could have been Lee's second yellow of the match. Allen Chapman saw it, didn't deem it intentional (which I agree with) and only whistled for a foul against Nguyen.

But the MLS Disciplinary Committee isn't here to re-referee games, they're here to protect players. Stertzer assumed a certain amount of risk sliding in to challenge for the ball and part of that risk is he's put himself in a vulnerable position. It should not be Lee Nguyen's or anyone else job to get out of the way of a challenge from an opponent and the fact that the MLS DC is now offering that protection to defenders is a precedent the surely can not keep up. Now that the bar has been set, intentional stomps should be subject to 2-3 game total bans as they are surely more egregious than what Lee Nguyen did last Friday.

Oh, yeah. And the Revs gave up two penalties to RSL in that game too. The first penalty: Darrius Barnes undercuts Chris Schuler in the box.

Yeah, I mean, that's what happens. It was the only thing that really happened in the box and from any live angle the first time seeing it that's basically what you're going to see. Schuler jumps up, Barnes doesn't and then Schuler kind of lands on top of Barnes. In a vacuum, I would not be able to dispute this call.

But the rule itself still sucks. I said that at the beginning of the season, following the Revs 1-0 loss at the Philadelphia Union back in March, these "over the back" type of calls are not officiated with any kind of consistency or reason.

Yes, at first glance Barnes undercuts Schuler, but it's hard for me to understand this call because it's really Schuler that initiates the contact. All Barnes is doing is running shoulder to shoulder with his marker and if you want to say that Barnes didn't let him land or that it's still dangerous, I can't disagree with you. I hate the rule, not the call.

Referees have been tasked with cracking down on contact in the box, but that's not the kind of contact I think referees are looking for. Holding, jersey pulling, usually blatant stuff that has long gone unchecked in the box. All Darrius Barnes is doing is playing good defense if you ask me, but it's Chapman's opinion that matters and he says differently.

And if that's not bad enough, missing a fairly obvious offside call, the AR misses it again when Sandoval engages Tierney, which is interfering with play and again, offside.

Now, since we have to analyze the play a little more, does Sandoval actually foul Tierney, probably. Or at the very least, holds up Tierney for a split second so Stertzer can get to the ball first.

The offside thing wasn't as obvious because it happened on off a rebound, but it's from the original shot, and Sandoval was offside by about a yard. Still, I can't blame Chapman for this, his AR absolutely has to make the offside call and he also probably has the best angle on Sandoval fouling Tierney as well. Do I let Chapman completely off the hook here, no, because he should still be able to see Sandoval all over Tierney if he can see Tierney dumping Stertzer to the ground.

I think it's enough to overrule the blatant trip by Tierney but I will say that if the call against Sandoval had been made, Chapman could've still carded Tierney for that challenge. Even if it was a dead ball situation, it's a terrible idea by Tierney, being fouled or not. A.J. Soares got a yellow for a elbowing an offside opponent I believe last year, and it's the same idea: the original foul takes precedence (Sandoval's foul/offside) but you're still responsible for your action (Tierney's trip).

Overall, it's a tough way to lose three points. I won't say the Revs deserved to win the game, but at the very least they deserved a point. I can live with the Barnes penalty, there's no way to fix that rule or that call. Chapman made a judgment call that I don't have much of a choice but to agree with. The second call is inexcusable. Deflection or no, Sandoval is offside by a margin I would not deem "close" and at any top flight level, that call must be made.