The Revolution lost a match they will feel they should have won on Sunday afternoon to the Red Bulls. Steve, Corey, and Nick contributed ratings to assess the performance of each Revs' player on the day.

Share All sharing options for: Revolution 0-2 Red Bulls: Player Ratings and Man of the Match Poll

Steve: You faced two shots, you let in two goals. Luyindula's shot may have been a rip and a half, but I don't care what Dorman says, that first goal is on you man...Corey: Simply put: It's Brad's turn after the break... Nick: If you come off your line in that spot, you have to come away with the ball--or parry the corner to safety. Bobby did neither, and his performance suffered as a result.

Steve: Misplaced one pass all night. That, plus reasonable defense and that rocket near-goal earns you a six in my book...Corey: A much improved game from Tierney compared to his below average performance the week before. A force in the attack all game...Nick: The left back looked electric when joining the attack, and stung a few dangerous shots on frame. Successful distribution helped create several goal-scoring opportunities. 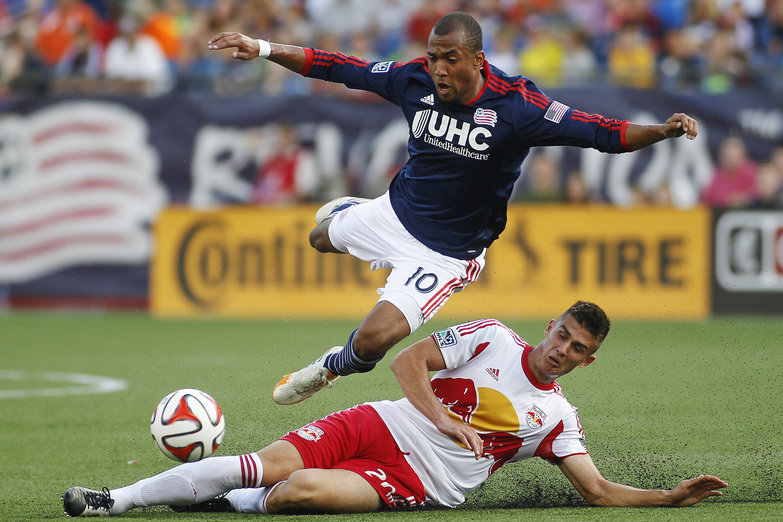 New England's normally-lethal finishing was a real letdown as they lost 2-0 to the Red Bulls at home.

Steve: He was solid and blameless on the goals. Uncharacteristically good in passing, though he did launch a few infuriating long balls to no one. Recoveries everywhere, too...Corey: Kept it locked down for the most part and adapted well to the Revs' odd 2nd-half formation/tactics...Nick: Overall strong performance from the underappreciated CB. An outstanding passing night and tough, physical defending benefitted the Revs all night long.

Steve: 92% passing on the evening, and he put it together with strong tackling, typically good positioning, and aerial dominance. It feels weird to rate a defender this high in a two-goal loss, but he's deserving...Corey: Had a nice outing but I still wonder how much that "leadership factor" is still there with him...Nick: Thought JoGo distributed well and manned the center of the park with typical physicality. Looked particularly sharp in the air, too, especially in the late stages.

Steve: Pretty good passing night with some great defensive numbers, but let's be honest. He attempted no crosses as a right back. He should have put away that scoring opportunity, or at least not stuffed it into Robles' shirt. And he probably needed to close down Luyindula on the second goal...Corey: Farrell was a beast, particularly on defense. On the attack, however, he continues to fall a bit short - the final product is not quite there...Nick: Brilliant defending shut down several dangerous moments, but I can't help feel as though he gave Luyindula too much space on the Bull's second tally.

Steve: Dorms was careful with the ball but he was unusually quiet defensively and in the tackle. Also, he may be somewhat at fault, along with Farrell, for Luyindula's goal...Corey: This may have been Dorman's worst game all season. Mental lapses stifled his production as the pivotal midfield cog that he needs to be...Nick: Held up the middle with incredible strength, but Sunday's match further exposed AD's greatest flaw: slow decision making. On multiple accounts, Dorman failed to see the necessary pass, slowing down the Revs attack.

Steve: Lee was at the center of literally everything good the Revs did. He passed well, created something like five or six clear goalscoring chances, and terrorized the Red Bulls defense. But, for the first time since he joined the Revs, he was too selfish in the final third...Corey: Looked sharp for the most part, but not quite enough in the final third...Nick: Creativity in the early goings nearly helped the Revs bag a goal. He seemed to run out of ideas, though, despite serving as the match's most dangerous player. May have benefitted from a little more generosity in the attacking third.

Steve: Daigo had a great match all around. Clean passing and heavy involvement in the final third were highlights...Corey: A hugely important switch that needed to be made after that Montreal game. The team looks so much more in-sync with him on the pitch...Nick: Quietly turned in one of his best performances in navy and red. Superb passing night (94%) added a needed spark to the Revs attack.

Steve: Everywhere but on the scoresheet. His shot near the end of the first half off the woodwork was magical, and he was on target twice, but again, couldn't beat Robles. He's clearly feeling it right now but that didn't matter on the evening...Corey: What a world of a difference it makes when Fagundez is involved throughout the match. His performance should have been rewarded with a goal...Nick: Crafty evening from start to finish, but in the end, just couldn't find anybody but Robles. Had several key passes moving forward--and nearly finished a wondergoal in the first half.

Steve: Had to feel for the guy, he was wide open throughout the first half on the right and no one wanted to pass to him. Still put two on target, but whiffing on a couple crosses was the more egregious offense. Also didn't pass all that great and continues to showcase a surprisingly poor first touch...Corey: For all the plaudits he's gained in the month of May, he's just simply not clinical in front of goal and that really hurt the Revs in the late stages of this one...Nick: Threatened from minute 1 through minute 90, but needed to leave Sunday's match with a goal. Too many opportunities to come up empty, especially on the bounding ball in front of an unmanned goal.

Steve: He wasn't as effective as in previous appearances, but his effort and physical presence was still beneficial, and he was shooting. Thought his "tactical" substitution was a mistake...Corey: Not his best night. Link-up play with the midfield just wasn't really there...Nick: Torched a shot on frame in the opening moments and then disappeared. Poor distribution, combined with unenthused hold-up play, led to a short evening.

Steve: I didn't like his deployment strategy, but he was a clean-passing dynamo in the attack and demonstrated a little of the old Kelyn we saw all through 2013...Corey: THAT's the Rowe I wanted to see. Added so much to the attack in the second half. He put it all out there...Nick: Entered the second frame and immediately added much-needed energy. Hit four shots, including one on frame, in an abbreviated showing.

Steve: Again, nary a misplaced pass to be found, but this time he didn't really add anything the game desperately needed. He also didn't take anything away, though...Corey: Didn't add much and I would have preferred to see Heaps bring on a striker instead...Nick: Quiet performance for the rook', despite earning 20 minutes off the bench. More or less a nonfactor during a match where his creativity was desperately needed.

Steve: Limited time. Looked careful with the ball, which is a good thing...Corey: Underwhelming to say the least. Would have preferred to see Davies or Imbongo try their hand in the same situation...Nick: Limited opportunity to make a difference, but inserted a little flair in the waning moments.